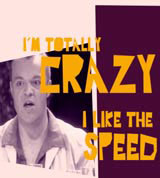 Things have certainly moved on since 1994, when three ex-Royal College of Art product design graduates, Gary Lockton, Simon Waterfall and David Streek, set up Deepend in a dingy, West London shop with blacked out windows. Since then, Deepend has swapped sleaze for global expansion, with six more offices in the US, Europe and Australia, and a fashionable address in London’s Shoreditch with around 100 staff.

In times of digital turmoil, Deepend has maintained a reputation for some of the most creative digital media work in the UK, winning 19 international design awards, and collecting clients such as Volkswagen UK, Sony, Cartoon Network and the Design Museum on the way. Still owned and run by its original founders, it remains one of the few large, independent digital design consultancies, and one with a healthy fee-income of over £4m.

Since 1999, Deepend has been placed with a group of seven other companies under the banner Deepgroup, of which Lockton, Waterfall and Streek are the principals. Each of the Deepgroup businesses has its own managing director and managing autonomy. Because the consultancy has grown organically rather than through external funding, Deepgroup retains a level of centralised control. All the companies are related, yet at the same time they are differentiated by their specialist areas.

When I visited Deepend about a year ago, I was impressed by the buzz, the youthful, yet design-savvy atmosphere and, above all, by the desire of its founders to explain and promote the Deepend ethos beyond its economical benefits. Design director Streek emphasised that the consultancy didn’t believe in conventional corporate approaches, such as owning a company car, and that it had a very low rate of staff turnover.

The consultancy presented itself as a working lifestyle, augmented by an in-house canteen to promote social interaction, several, now legendary, recreational trips abroad and a visible, non-hierarchical structure. The decision to produce work for design bodies such as the Design Museum and British Design & Art Direction, and Lockton’s role as a member of the Design Council and as a director of the Design Business Association, further enhanced its visibility and prestige within the design community.

Today that initial spirit survives. Although Deepgroup has 265 employees worldwide, it is the separate existence of the companies within the group that means “Deepend’s integrity can be preserved and opportunities can be focused”, says Steve Blackman, communications director at Deepgroup.

When the digital media industry became more technology and strategy focused, Deepend decided that it had to preserve its original kudos. “We were worried about the cultural side of Deepend,” says chief executive Lockton. “Everyone who joined Deepend had joined a design company, and we wanted to protect those people. For cultural reasons, we could not imagine [the group] still working if we threw in a whole set of strategists and technologists. We decided that a better way was to set up separate ventures that would provide the technology and strategy,” he explains.

Hence the proliferation of companies with different names under the Deepgroup umbrella, all of which deal with specific sides of the digital business, but also free Deepend from site maintenance. “We decided that those companies could benefit from a relationship with Deepend, but they might want a choice. They can be autonomous if they want to be,” says Lockton.

To preserve the Deepend brand worldwide, Deepgroup is currently completing a “brand bible”. “It’s a set of thoughts,” explains Lockton. “We want to keep the overseas offices and the other businesses autonomous, so they

can pick and choose appropriate elements . It’s the same way as the management works in Deepgroup. The overseas entities run separate businesses. We don’t set the rules. They run a separate budget and we ratify it. They can work with who they want and employ who they want.

“The aim of Deepgroup is to provide help and resources to the other companies. Deepgroup [in itself] does not make profit. We provide centralised marketing, finance, accountancy, strategy and technology to all the other groups. It makes sense to centralise it, because since we don’t have external backers we must be profitable.” This relaxed attitude has so far paid off, and most offices have managed to plug into the indigenous market and continue to build up their own reputations.

Deepend Rome, set up in 1998, is creating websites for Italian Television Rai, as well as for design and architecture magazine Domus. Deepend Sydney has just completed work for Quantas and the Museum of Contemporary Arts. The planned opening of Deepend Prague this year will prove whether the Deepend brand can translate into the East European market.

While Airtight and Gluemedia are expected to open offices in New York next year, and new sites for Backend – which already has a branch in Bangalore, India – are being considered, worldwide expansion for the sake of it is not an aim of Deepgroup. “We want to consolidate the Deepend tradition. We don’t want to become too big,” says Lockton.

Meanwhile, Deepend London continues to ride the digital wave with new clients such as Nokia, Stella and The Society Of Typographic Designers. Its moving image team has recently designed the on-screen titles for BBC productions Ruby and Choice World Clubbing. So far it has not been affected by staff cuts like other digital groups.

Today, the founders of Deepgroup are happy to take a back seat and let the designers speak through their work. “It’s not just a business strategy,” according to Lockton. “It works for us. We lay out the arena and people naturally work together, as they’re good at what they do. There are few rules and little control. We nurture the group rather than order it around.”