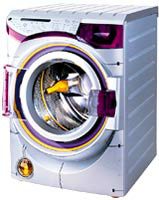 It may look like a square relation of Star Wars’ R2D2, but James Dyson’s space age Contrarotator washing machine has been out-performed by a model costing half its £1200 price, the Bosch Maxx, according to the Consumers’ Association.

But the association found it ‘very poor at cleaning’ with a maximum load, and maintains that Dyson’s energy efficiency claim is misleading.