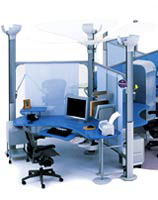 Despite the predicted demise of paper in the 21st century office, many workers still require storage and filing solutions. However, current flexible, open-plan work spaces do not satisfy the need for separate, fixed enclosures.

Archive rooms, filing cabinets, bookcases and even conventional meeting places are being replaced by partitions, pods, mobile screen systems and flexible storage systems. Designed to create non-territorial environments, they reinforce the notion of a nomadic office existence, where the workplace is fluid and laid out according to temporary needs. Designed in transparent, multi-coloured or hi-tech materials, they often stand out as a feature in themselves, creating a futuristic working backdrop.

The current fashion for partitions was noticeable at the Orgatec office trade show held in Cologne last October, in particular at the Vitra stand. Here, even the latest collection was displayed in free-standing, coloured Plexiglas cases, designed by Dieter Thiel. Antonio Citterio’s tweaked Ad Hoc and Vademecum systems clearly demonstrated how the manufacturer has adapted to today’s philosophy of working around the clock, beyond the constraint of office walls.

Because more traditional furniture is deemed to be “old economy”, it is being modified to adapt to today’s state of affairs. Vitra’s own new office in Weil am Rhein perhaps best demonstrates this with a synthesis of existing concepts, allowing each employee to choose a work space to fit his or her specific needs.

“The whole idea was to create an element of flexibility,” says Sevil Peach, director of interiors consultancy Sevil Peach Gence, which designed the offices. “The success of it is that you can feel cosy, but still interact with colleagues and go from A to B. We provided a collage of working environments to enable people to change throughout the day,” she says.

Supporting the idea that the open-plan layout may have had its day and that workers relish privacy, Konig + Neurath displayed at Orgatec the Standby Office. This is a mobile, free-standing solution providing a whole ergonomic office workstation and self-contained storage system.

“Storage has become a focus again,” says designer Luke Pearson of London design duo Pearson Lloyd. Suddenly, there has been an abundance of solutions proposed by manufacturers. “There is now an attention to details and the quality of materials usually applied to desks and chairs,” he says.

Pearson Lloyd has just launched Knollscope, a flexible storage system for furniture company Knoll, tailored to suit both the mobile working practice, known as hot-desking (or “hotelling”), and the more conventional stationary working practice, with its need for bulk storage. “Our basic premise is a panel system which works as a technical wall containing all the power cables and the data,” says Pearson. Mobile elements revolve around a single panel, which can be filled with storage elements or support desk units. Knollscope is built in sheet steel and is supplied as a flat pack to avoid damage during transport. Pearson Lloyd has also created some Knollscope accessories for the extreme end of portable storage, which can be detached and used for meetings outside the office or for home working. A contemporary take on the briefcase, Light Fingers is a translucent personal box which can be fixed to the storage system or carried around, while Light Box is a detachable file storage container designed for both personal and team use.

The workplace has always called for experimentation both in terms of products and theories. The Helen Hamlyn Research Centre is currently looking into how new working practices are affecting privacy. The aim of one particular project, sponsored by Steelcase and Ideo Product Development, and conducted by product designer Tim Parson, is to develop product scenarios that can fulfil the need for privacy, ease of concentration and quick communication. Parsons trawled several British media offices and researched what hypothetical implications a variety of technologies, such as the Bluetooth messaging system, could have for the design of office products. The result is a prototype, to be produced by Steelcase, derived from observations of user behaviour. Another Hamlyn project is looking at the future of the computer workstation for sedentary office workers. Pascal Anson, sponsored by Kinnarps, is producing prototypes which will be tested in a number of offices in Sweden and the UK.

These studies of ergonomic corporate culture sound promising, but ultimately many offices still need basic functional filing and storage systems. Ken Lingwood, director of Bulo’s London showroom, Atwork, is sceptical. “It’s a lot cheaper to move people than furniture,” he says of the craze for hot-desking. “But if you take away the job [title], all skills are pretty much the same.” Everyone uses keyboards, for example, and the need to be flexible only really arises when it comes to personal filing, he says. Heavy duty storage still tends to be bulky and in a fixed place. In his opinion, the days of the paperless office have yet to make their mark.

Sarah Trown, system sales manager at British storage and filing systems manufacturer Bisley, agrees on the need to move people rather than furniture. Understandably, she believes that “it’s the storage that makes an office”. Bisley’s newest product, Docklock, provides a flexible locker system for call centre employees who want to keep their belongings with them as they move around.

More and more offices are commissioning bespoke solutions to fit into their working ethos. Found Associates has just completed the interior for digital media group Oyster’s new office in London. To solve the problem of storing equipment such as cables and fittings, Found Associates has created an orange glass-fibre resin “ribbon” in the form of a dado panel.

“By altering its form, it morphs into vertical planes, walls, doorways and ceiling rafts, creating and defining spaces,” says Richard Found, director of Found Associates. The ribbon culminates in reception, where it folds away from the ceiling and wraps around itself to form the cantilevered reception desk. Its transparency means that the fittings, cables and outlets are visible, creating a continuum between “behind the scenes” storage and those employees facing the public. “Because the ribbon is continuous, forming a series of loops on every floor,” says Found, “it encompasses everyone and everything, becoming a visual metaphor for the links it actually provides.”

So whether it’s the architectural space or a new generation of products, the workplace is gearing up to increase space effectiveness while alleviating the everyday grind.