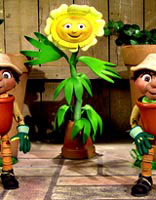 The idea of reviving the 1950s children’s TV show Bill and Ben the Flowerpot Men made as much sense as bringing back Dixon of Dock Green. There is usually a good reason why TV shows are killed off. Those of us willing to own up to remembering the original have a faint recollection of a couple of rather awkward string puppets made out of flowerpots, jiggling around while saying “Flobbalobalob”, or words to that effect. My mum tells me I loved it. Undeterred by 50 years of progress, the BBC approached market leaders Cosgrove Hall (Dangermouse, Oakey Doke, Brambly Hedge), a couple of years ago to reinvent the terracotta terrors for the 21st century.

The result is more colourful, spirited, fluid and story-led than the black-and-white originals. This would not be difficult. Back then, TV was in its infancy and kids were mesmerised by the very idea of moving pictures in a little box, never mind the content or quality. Fifty years on, the pre-school entertainment market is so buoyant that your average three-year-old is more familiar with the characters in Rugrats than he is with his own family.

In its day, Bill and Ben probably seemed radical. Those early BBC kids’ shows were so anodyne they made Teletubbies look like a snuff movie. But at least Bill and Ben had something resembling a subversive streak. They gave it a bit of wellie and got told off every week by the motherly Weed.

The new-look show clearly intends to develop that anarchic spirit. In episode one, which went out last week, the credits had hardly finished rolling before our likely lads mugged Scamper the Squirrel for a nut. Can we expect future storylines in which they hurl Hedgehog into oncoming traffic and Sellotape up Magpie’s beak?

What immediately strikes anyone ancient enough to remember the originals is the upgraded production values. Instead of ungainly string puppets which wobbled all over the place, we now have slick, stop-motion models made out of metal and glass fibre with a latex skin, so that each time they’re moved into a new position, the skin moves too, giving an impression of realism. Each episode has about ten different settings, and as many separate characters – compared to the original one setting and three characters – plus a live tortoise.

Cosgrove Hall’s Bridget Appleby, who was also responsible for Oakey Doke and a terrific makeover job on Noddy, doubts whether the old Bill and Ben would pass muster with today’s more discerning audience. “It was simple and repetitive, much like Teletubbies, but without the visual distinction. I liked their anarchic quality compared to the other children’s shows, which were all rather worthy. But it was the novelty of it that held your attention because there was so little competition.”

Appleby’s experience of rural subjects for the pre-school market – Wind in the Willows, Brambly Hedge, Oakey Doke – has enabled her to bring the world of Bill and Ben to life, creating a garish garden setting worthy of Alan Titchmarsh and co. One of Appleby’s more inspired additions is a garden shed, all dark shadows and age-old clutter, where the dynamic duo will be getting up to all manner of mischief. I have yet to watch it with my three-year-old but I suspect he will compare it with Toy Story 2 and find it wanting. The 21st century pre-school punter is a hard nut to crack.

Bill and Ben the Flowerpot Men is on BBC1 on Thursdays at 3.45 pm