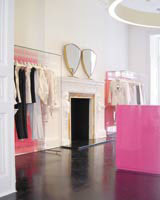 It’s easy to imagine that listed buildings are limited to castles, cathedrals and the odd stately home. In fact, English Heritage estimates that London alone has more than 18 000 listed ‘items’, ranging from Georgian town houses and Victorian music halls to postboxes.

These historically important postboxes might not offer much in the way of challenges, but Britain’s listed buildings regularly take designers to task, across retail, leisure and cultural venues.

In the past few months, several high profile refurbishments of listed buildings have come to fruition. These range from London’s Hackney Empire (DW 8 January) and the London Coliseum, home of the English National Opera (DW 19 February), to restaurants such as Pearl (DW 4 March) and high profile retail venues such as Stella McCartney’s London store (DW 9 October 2003).

In recent weeks it has been reported that the new operators of the listed Hippodrome nightclub, rock venue the Camden Palace and St Pancras Station’s Midland Grand Hotel are all preparing to embark on massive revamps of the buildings’ interiors.

But how straightforward will the work be? Listed structures can be partially, even fully demolished when consent is attained. But even at some distance from their most rigorous, listing and local planning authorities can still inhibit creative thinking.

Given that British consumers are, by and large, a sophisticated, modern audience, with corresponding tastes and requirements, how do architects and designers balance their demands with those of planning and listings authorities? United Designers’ creative director Ian Bayliss admits projects can cause some initial anxiety, but he adds that this dissipates once the group ‘gets inspired’ by the thinking behind the original building.

‘[Ultimately], it’s much more fun to have design constraints rather than a blank sheet of paper, because you really have to put your thinking cap on,’ he says.

According to Bayliss, the design constraints at the Economist Building were endless. The group was not allowed to touch ‘virtually anything: the walls, the wall finishes, the structure’, he says. But luckily, these restrictions formed a neat fit with United Designers’ typical approach to listed structures.

‘Our technique tends [towards] installations rather than changes to the fabric,’ says Bayliss. ‘If a building is listed, it’s of architectural importance and it’s already got something to say. We try to tap into that and embellish it.’ Accordingly, the biggest alterations the group made to the site were to install marble flooring; a ‘square block’ around the lift, escalator and bars in the centre of the dining room; and net curtains to shield diners from the daylight streaming through the encircling windows. However, such a light touch is not enough for some refurbishment projects involving listed buildings. Last year, Consarc Consulting Architects refurbished the interiors of the Sydney House Hotel, situated in two adjoining Georgian town houses.

As the client’s vision involved ‘modernising’ the buildings to create a ‘discreet, contemporary’ experience for guests, some drastic changes had to be made, says lead project director Liz Pickard.

Consarc achieved a happy medium by analysing what it felt was the essence of Georgian architecture and applying these principles in a contemporary way.

The work is a direct reflection of Pickard’s philosophy on refurbishing listed structures. ‘Designers should always respect the inherent logic and reasoning [in historic buildings], especially when they’re of high quality. But I think all buildings should continually be adapted for modern use,’ she maintains.

Tim Ronalds Architects principal Tim Ronalds, who was instrumental in the revamp of the Hackney Empire’s interiors, shares this view. ‘A lot of conservationists think that what you should do with buildings is restore them to their original state. We don’t believe – certainly with theatres – that this is a good idea at all,’ he says.

In a nod to the changing nature of performances, the practice opted not to restore the auditorium’s colour schemes to Frank Matcham’s original whites, greys and pale pinks. ‘[These] work less well with modern performances, where very powerful stage lighting is used,’ says Ronalds.

‘We couldn’t assume that things could be ripped out just because they’re not Georgian,’ explains group director Jonathan Clarke.

Shoehorning a contemporary brand into a listed environment and meeting the needs of modern audiences is a challenge, but one that can be met with effective design and an air of conciliation.

Arts Team at RHWL partner David Wright, who led the refurbishment of the London Coliseum, sums up the dilemma designers face. ‘It’s always a matter of compromise. You’ll never get as perfect a solution to client needs from listed buildings as you would from scratch [and] you have to make some hard decisions,’ he says.