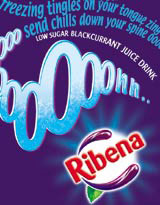 Named Oooohh and Aaarghh, after the ‘phonetic response to the sensation’, the former has a ‘cooling aftertaste’, the latter a ‘chilli kick’, she says.

‘The taste sensations are quite distinct and targeted at young adults rather than young children,’ says Costen.

‘In the current climate specifically targeting children is difficult and brands like Ribena are working to develop a slightly different audience.’

The work represents the first time the brand’s ‘tight guidelines’ have been relaxed.

The strongly typographic packs aim to explain the concept without losing ‘intrigue about the product’.

‘The packaging tells the sensation story and also conveys the distinctive undertones of the [brand] personalities. The challenge is to give consumers enough information without giving the game away,’ Costen explains.

The products go on shelf in major supermarkets this week.

Seachange won the work on the strength of its previous work for the brand and parent company GlaxoSmithKline.