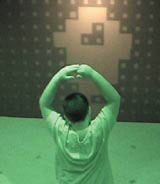 Design teams from three European universities have created Mediate, a prototype play-space that is designed to help children with autism.

Developed by a team of designers from the University of Portsmouth, with designers from universities in Barcelona and Hilversum in the Netherlands, the 4m2 hexagonal area is a multi-sensory environment, where children can interact through visual, sonic and tactile means.

Infrared cameras monitor children in the environment, triggering visuals that are back-projected on to two large screens. Pressure sensors in the floor and walls of the space respond to movement and touch and it also features a wall that responds to sounds ‘like a tuning fork’.

According to Portsmouth University project co-ordinator Dr Chris Creed, the group was briefed to develop a ‘responsive, non-invasive and informal learning environment’.

‘Children with autism [find the world] a chaotic, uncontrollable place. This space will help them realise that it is possible to control the sensory world and give [an outlet] for creative expression,’ explains Creed.

A prototype of the play-space will be on show at the Aspex Gallery in Portsmouth from 27 March to 17 April.