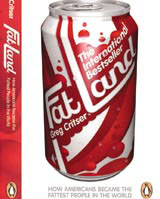 Unreal has designed the jacket for the paperback edition of Fat Land, written by Gret Critsers. The book, which looks at the issues of obesity in the US, will be published in its paperback version by Penguin in the summer. According to Unreal head of design Brian Eagle, the group was briefed to create an ‘iconic, easily recognisable’ cover that was ‘less offensive and easier to take off the shelf’ than the hardback cover, which featured the naked torso of an overweight man. The jacket also features a specially created font by Unreal designer Ben Brookbanks.