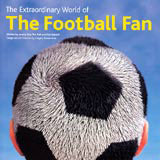 “Writers write and footballers play football. It’s as simple as that,” states a new book investigating, and called, The Extraordinary World of The Football Fan. The book is written by former Stocks Austin Sice director Jeremy Sice, Design Week contributor and writer Tim Rich and Rick Glanvill and designed by Gregory Bonner Hale.

Delving into the increasingly unfathomable psyche of football fans, the book is the first in a series of publications to be produced by Extraordinary World, the media company established by Sice and Rich at the beginnning of this year.

With the fantastic front cover – featuring Rich’s head after eight hours of hairstyling – summing up all the madness and obsessive behaviour of football supporters, readers are then boldly told on the first page that “being a fan is not about spectating”.

Captured by this intriguing statement, appealing to both football fans and those constantly trying to come to terms with friends and family members’ strange football-related rituals, readers are then led through a labyrinth of various insights into this “extraordinary world”.

“We didn’t see anything that captured the spirit of being a fan,” explains Sice, “so the key objective was to use the knowledge gained from our design and writing backgrounds to make the book accessible to the public – both fans and non-fans.”

GBH’s presentation of the book is combined with many well-known photographs as well as original images, including cartoons, made-up headlines and explanatory diagrams. The series of cartoons depicting the agony experienced while watching a match via teletext is spot-on while the recreated receipt from Manchester United will provide great amusement for the apparent few who don’t support the Premiership champions.

Many of the sections, like football arguments, singing and mathematical acrobatics are sure to strike a chord with die-hard fans everywhere, with the final chapter about the summer reflecting the void felt by millions when the season ends.

“The last 90 minutes have been about our take on life as a football fan, but it’s not intended to be a definitive account, just one version of what being a fan is all about,” reads the book’s conclusion.

“We really wanted to create something of the quality that people do for the corporate market, but for the consumer market. Many books, particularly about football, haven’t had a lot of care and thought put into them,” adds Rich.

The Extraordinary World of the Football Fan definitely provides a humorous and thought-provoking alternative to the more focused club annuals and statistics books, and will appeal to existing fans as well as those unfamiliar with all the intricacies of the beautiful game.

But one area sadly unwritten about by Sice, Rich and Glanvill is that of ambition, and the unwavering belief that you will still be signed as a professional player for your favourite team, whatever age you are. Maybe the trio have come to the conclusion that “writers write and footballers play football”, but I’m still convinced the two can be bridged and continue to wait for Arsene Wenger’s call.

The Extraordinary World of The Football Fan by Jeremy Sice, Tim Rich and Rick Glanvill is published on 6 May by Virgin Books, priced £9.99