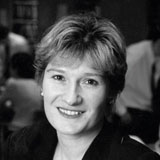 Research published last week by Willott Kingston Smith appears to point to an increasing financial maturity among design groups, with staff costs taking a necessary dip as the industry plots its course back from the slow down of 2003/4 (DW 4 May).

The accountant’s Marketing Monitor report reveals that staff costs in the design sector fell from £50 566 to £42 808 in the six months since the last survey, which draws on data from Companies House.

Amanda Merron (pictured), a partner at WKS and author of the report, suggests that, on the one hand, the figures reflect the design industry’s improved attitude to financial housekeeping. For some years, WKS has advocated an optimum ratio of staff costs to gross income for marketing and communications companies, with 50 to 55 per cent being the target figure for successful design outfits.

Given average revenues of £74 309 per employee, the design industry has improved its index figure from 65 per cent to 58.4 per cent.

However, one person’s staff cost is another person’s salary, and the dramatic reduction in staff costs now appears to be recasting the design industry, formerly one of the best payers in the marketing and communications arena, as one of the least lucrative in terms of salary.

The negative implication of the reduction in costs for the industry is also apparent from the WKS figures, given that the all-important measure of productivity per head fell during the period, albeit by a lesser margin than staff costs.

The suggestion, according to Merron, is that experienced staff have been sacrificed to the balance sheet, and that the cheaper staff, who have taken over their roles, have actually proved less efficient, resulting in a 5 per cent fall in average productivity, from £78 049 to £74 309.

What’s more, operating profit per head fell from £5900 to £4763 during the period, reflecting the fact that companies have failed to reduce their non-staff overheads in line with revenue and staff numbers. Operating profit now stands at 6.1 per cent of revenue, while WKS points to an optimum figure of 15 per cent.

Merron acknowledges that a decline in productivity and profitability – albeit on a relatively marginal scale – is not the ideal way to foster the long-term performance of the sector.

Design consultancies recognise the picture and the threats it poses. Marcello Minale, managing director of Minale Tattersfield Design Strategy, acknowledges the constant need to keep costs down, but cautions the industry not to stint on talent. ‘Because resources are getting thinner, attention to detail can slip through the net and there is a risk of losing quality in the long term,’ he says.

Minale suggests that the design industry is better positioned to keep a lean structure than many of its counterparts in other marketing and communications sectors, simply by grooming its designers to handle client contact. ‘It is when you have too many people in the middle of the design process that costs get very inflated,’ he says. ‘Where you really have to invest is in making designers more aware of business issues and giving them the tools to talk directly to clients.’

• Operating profit per head down by almost 20 per cent

• Ratio of employment costs to gross income has improved from 65 per cent to 58.4 per cent

• Operating profit margin down from 7.2 per cent to 6.1 per centr