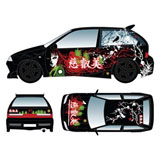 Japanese horror films, manga and an ‘avenging samurai woman’ are the inspiration for a ‘pimped up’ Suzuki Swift car, which has been given a livery overhaul by Northampton graphic design and marketing communications consultancy Engine. The work was commissioned by MTV UK for its car makeover show Pimp My Ride UK and will feature in the programme on 21 May on MTV.