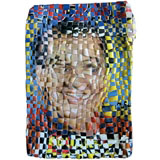 There is more to print than ink on paper – it can be a remarkably versatile medium, ranging from old-school techniques to the latest in 3D stereolithography, on materials from fabric to glass. Jim Davies reviews a book on contemporary print-making

Reports of the death of print have been greatly exaggerated. In fact, a new book by Gill Saunders and Rosie Miles, curators at the Victoria & Albert Museum’s Word and Image department, demonstrates that, as a medium of artistic expression, it’s alive, well and still making a distinct impression.

Prints Now: Directions and Definitions provides an accessible overview of contemporary print-making over the past 20 years. We’re in the realms of fine art here, rather than graphic design. But many of the featured works are graphic or typographic in intent, and, in terms of pushing the medium’s boundaries, it offers plenty of food for thought for the contributing artists’ more commercial cousins.

Not that we can expect to see an image of Michael Johnson screen-printed in his own blood on Egyptian linen in the near future. Artist Lee Wagstaff’s gory self-portrait Shroud is one of the book’s more outré offerings, but most of the others amply illustrate how technology, context, scale and form can be exploited to create surprise, delight and talking point. 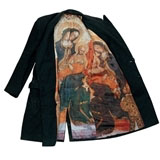 Some of the names here are familiar: former Young British Artists, like Sarah Lucas, Damien Hirst and Rachel Whiteread; and artists like Richard Hamilton and Julian Opie, whose Pop Art sensibilities sit very comfortably with the disposable, mass-produced nature of print. Others, culled from far and wide, contribute to a rich and articulate collection, representing different perspectives and cultural contexts.

The book itself feels clean, well-paced and well-organised. It has been designed by the ever-rigorous A2/SW/HK, which has contributed its own typefaces to the cause. The inky stencil font, used large on the cover and more modestly for headings throughout, is neatly apposite.

My only gripe with Prints Now is that it’s not nearly expansive enough. Touted as a summary of two decades of international output, such a broad, intriguing topic demands far more paper stock than a fleeting 144 pages and 100 colour plates. It’s a delicious enough appetiser, but you’re left wanting something more substantial.

Prints Now: Directions and Definitions is published by V&A Publications, priced at £30

The Team creates identity for Institute of Educational Assessors