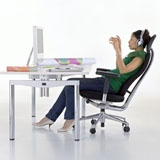 Office culture is far more relaxed than it used to be, but leaning back at your desk or using laptops on sofas bring new health hazards. Jeremy Myerson looks at the work of furniture designers who are confronting this issue

For many people, work can be a pain in the neck. But spare a thought for the experts whose responsibility it is to ensure that we don’t call in sick with yet another headache. They’re the ones we should feel sorry for.

Ergonomists, furniture designers and occupational health professionals – highly qualified and highly skilled – have toiled away for years to keep us healthy at work. But, just when they’ve cracked the problem of working long hours at the desk, by providing the perfect furniture with just the right dimensions to avoid glare, and the adjustable chair with ideal lower back support, the crazy world of work spins on its axis.

Suddenly, people aren’t sitting upright to attention in serried ranks, part of a strict supervisory office culture. They are leaning back, part of the new relaxed working vibe, or quaffing cappuccino in the soft-seat area, or dragging their laptop into the British Library or the local city park to be part of the wireless-working revolution. As one set of workplace health problems are made redundant by better-designed furniture and equipment, and the European directives that enforce their use, along comes another set to give us all stiff necks and aching shoulders. Not to mention a new headache for the experts.

Leading ergonomist David Hitchcock has worked for more than 20 years in the field. ‘As working styles become less hierarchical and more relaxed, people are leaning back more. And the more you lean back, the more pressure you put on your body,’ he explains. ‘The ergonomist now has to review everything in the light of new ways of working. Once it was all about getting the workstation right. Today the biggest thing I am asked by companies is what they should do about all thneir people taking computer notebooks into Starbucks.’

Even those who don’t roam outside the office risk doing damage to themselves by working in ways that appear to be more comfortable, but, in fact, increase the strain. Hitchcock explains that leaning back in relaxed mode raises the risk of repetitive strain injury because the wrists are above the elbows. Many laptop users also sit too low, with the monitor too high and too straight for safety. 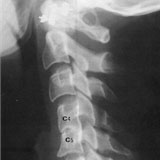 The ideal position, says Hitchcock, is what he calls ‘the neutral posture’ – with the chair raised so that the elbows are at the same height as the keyboard. This position puts the least loading on the body. But, as wireless broadband shakes up how and where we work, imposing the correct posture by design is becoming harder to achieve.

At least some furniture manufacturers are recognising the dangers and doing something innovative about them. Vitra, for example, has just launched the HeadLine office task chair, designed by Mario and Claudio Bellini. With its patented mechanics and stylish looks, HeadLine doesn’t just support the lumbar region, focus of attention in most office chairs, but also supports the shoulders, neck and head.

Vitra’s rationale is that conventional office chairs work fine if the sitter is working bolt upright. But, when the user reclines, as is becoming the norm, the standard contoured backrest for lower back support on ordinary chairs becomes a source of pressure. The sitter responds by over-extending the spine, which forces the neck and shoulder muscles to bear the full weight of the head. The result is aches and pains – and days off work.

Vitra’s HeadLine adopts a different approach. A flexible plastic back panel, suspended from a frame, supports the sitter’s lumbar zone in the upright position, but changes in profile, during transition, to a reclining position, to allow the shoulders to sink into an absorbing upper section. A backrest extension, with an integrated headrest, prevents muscle strain by interacting with the main back panel.

Hitchcock approves of Vitra’s concept. ‘It’s by far the most appropriate solution to this particular problem that I’ve seen. Usually, there’s a bolt-on sausage roll, whereas the headrest should be properly contoured, like those inside a car,’ he says.

Hitchcock’s own office chair is Steelcase’s much-awarded Leap chair, the result of extensive scientific and ergonomic research and many patents. He’s also an admirer of Don Chadwick and Bill Stumpf’s admirable and best-selling Aeron chair for Herman Miller, which started the vogue for giving aerospace-technology levels of support for the lower back in the early 1990s. Then there’s the Höganäsmöbler range of chairs, which has a hidden inflatable sack, to provide lumbar support, that can be adjusted to the user’s ideal curvature. But times and trends change and it is now the neck and shoulders of office workers that will increasingly get the treatment.

Changes in office space use will precipitate this new direction, especially the growing tendency for companies to make social and breakout space in offices more productive by introducing a wireless network in areas once earmarked for relaxation. This trend towards ‘on-line social space’, so bringing in the laptop-toting executives to tap away at sofas and coffee tables, has been identified by British furniture manufacturer Orangebox, which can count itself among the first to signal the physical hazards – and the product opportunities – of more relaxed working. 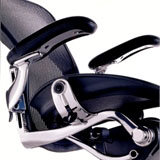 Orangebox’s annual Office Wars series of practitioner think-tanks have not only identified the ‘corridor warrior’, who is no longer confined behind a desk, but have drawn attention to the problems of planning offices so that there is no escape from your e-mail inbox, even in the cafeteria. At one Orangebox session, an environmental psychologist explained that people at work today have unreal expectations and push themselves too hard, while an interior designer suggested that simply carrying a heavy laptop to work damaged the neck muscles before the working day had even begun.

So, the new world of work can seriously damage your health, but can better office chairs be expected to solve all ills? As a representative of Regus, the office property company, told the Orangebox sessions, ‘If people are happy in their environment, no one mentions the chairs. But if they are not happy, they will say, “This space doesn’t work for me because of x, y and z.”‘

Jeremy Myerson is professor of design studies and co-director of the Helen Hamlyn Research Centre at the Royal College of Art. He is co-author, with Philip Ross, of The 21st Century Office, and his new book, Space To Work, will be published by Laurence King in September