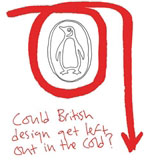 An initiative to forge a stronger UK design industry in the face of mounting overseas competition is launched by Creative & Cultural Skills and the Design Council this week, giving the sector a brief to ‘redesign design’.

UK design is ‘under threat’ and must become more ‘professional and joined-up’, according to the Design Skills Advisory Panel, which is to canvas designers and consultancies for ideas on how to ‘design a new design industry’.

The panel, set up in 2004 by the Design Council and CCS, has spent a year discussing the future of the industry and is now hoping to generate more than 3000 responses to an open-ended questionnaire, which will be available at www.keepbritishdesignalive.com as well as through direct consultations.

‘What we’re really hoping is that we get a basic approval for the foundation blocks we already have – learning, education and accreditation,’ says David Worthington, managing director of Conran Design Group and deputy chairman of the panel. ‘This is a respected industry, but it is often run roughshod over. And there are a lot of people in South-East Asia who are working very hard to become an international design force, like the UK is now,’ he adds.

Among the proposals is a single system of ‘internationally recognised accreditation for individual designers and consultancies’, similar to those used by the architecture and marketing industries.

It is not clear how such a system might relate to the accreditation offered by the Chartered Society of Designers, which reaches consultancies through its Design Association, as well as through individuals.

‘The question of who supplies [accreditation] and what is supplied are different things. I think both the Design Business Association and the CSD feel equipped to do this, but there is nothing in what we are saying that is calling for the demise or significant change of any organisation,’ adds Worthington.

The consultation period closes in October and the results of industry feedback will be published in a final Skills Plan document in February 2007.

PROPOSALS FOR A ‘NEW DESIGN INDUSTRY’

• A widely-owned, international system of individual and corporate professional accreditation