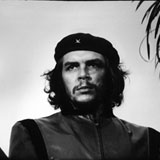 Few images have been as appropriated by marketers and designers as Alberto Korda’s classic photograph of Che Guevara, but it hasn’t lost any of its power, says David Benady

Che Guevara must be turning in his grave. Capitalist entrepreneurs have converted his image into a brand icon and used it to flog just about everything, from ice cream to pop music. The classic portrait of the Marxist revolutionary, handsome and wild-haired, eyes glinting with fervour and a beret cocked over his flowing locks, is now, apparently, the most reproduced photograph in history.

But, while revolutionaries from Bolivia to the Middle East have used it to symbolise the anti-imperialist struggle, in the West, the image has become as cheap and tacky as bubblegum stuck on a pavement.

An exhibition opening at the Victoria & Albert Museum in London, in June, traces the extraordinary journey of this single image of Guevara from symbol of popular uprising to high street icon, caricature and parody. The image has been used on lighters, cigarette packs, T-shirts, clothing brands, badges and mugs, as well as in ads for Jean Paul Gaultier sunglasses. It has appeared as a spoof of the Little Chef logo and with the face of a monkey on fashionable SSUR Plus T-shirts.

The original portrait, entitled Guerrillo Heroico, was taken on 5 March 1960, shortly after the Cuban revolution Guevara helped to ignite. Former fashion photographer Alberto Korda snapped the Argentinian doctor as he stepped on to the memorial podium at a funeral of more than 100 Cubans killed in a terrorist attack blamed on the US. The portrait remained largely unknown until it was reproduced in Italy at the moment of Guevara’s assassination in 1967, when the image burst on to the worldwide scene as an icon symbolising the student uprisings of that year. 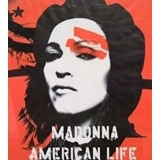 The photographer later remembered being inspired by the intensity of Guevara’s expression, which he described as ‘angry and pained’. Guevara would no doubt be angered again at the sight of celebrity Liz Hurley sporting his image on a T-shirt, while clutching a £2500 Louis Vuitton bag. And he might be pained – as were many others – when Madonna styled herself in his image on the 2003 CD American Life.

But the diffusion of his image in consumer marketing and branding, and its eventual journey into pastiche and kitsch, sums up the Western capitalist values Guevara strove against. As Rob Miller, director of the pro-Castro Cuba Solidarity Campaign, says, ‘The West is so obsessed with consumerism that every image gets turned into ‹ a commodity, whether it is Guevara, Princess Diana, love or death. Personally, I am not against Guevara’s image being widely used because it gets across the socialist message.’

This rankles with opponents. When the V&A’s exhibition, Che Guevara: Revolutionary and Icon, curated by Trisha Ziff, opened in the US, it was heavily criticised for celebrating a man some Americans view as an enemy of democracy with blood on his hands.

But, according to V&A curator for contemporary programmes Zoe Whitley, US critics are missing the point. ‘Some reviews were very much against the idea of having an exhibition about Guevara. But what is fascinating is that the image exists separately from the man and it has taken on a life of its own. Korda wasn’t able to control its use, and Guevara is able to be both revolutionary and icon. The image exists as a larger-than-life symbol, which is nothing to do with the man,’ she says.

A contrasting view is that people wearing Guevara T-shirts may not be well versed in Marxist ideals, but they know he stood for revolt and anti-establishment values. Andy Kirk, a senior planner at Design Bridge, admits he’s an avid consumer of Guevara imagery, having owned a poster and T-shirt. ‘The youth of today have raided my music collection and now they’re after my cool icons,’ he says. ‘Guevara means the same today as he always has done. He is shorthand for rebellion. There’s great mystique about him which has not been stripped away. He has not been tainted, because he died young,’ he adds.

Meanwhile, Landor creative director Derek Johnston says the image has become a brand marque in its own right and he attributes its omnipresent use to the sheer simplicity and beauty of the outline. ‘Each youth generation takes it and owns it for themselves. Maybe it has become slightly divorced from its original meaning, but the spirit of it is still strong. Anyone who sees it will ask who Che Guevara is. It is highly politically charged – it says we are not going to take this shit any more,’ he says.

Korda was unable to exercise his intellectual property rights over the photograph until Cuba signed up to global copyright agreements in the 1990s. Backed by the Cuba Solidarity Campaign, Korda successfully sued picture agency Rex Features and ad agency Lowe Lintas for infringement, in 2000, after they used the image in an ad campaign for Smirnoff (Guevara was teetotal). Korda died shortly after, but rights to the photograph have passed to his family. The CSC’s Miller warns brand owners that the organisation is now policing the image and will sue if it is used without permission. Even so, it has been used in Australia by Unilever’s Magnum ice cream brand, which produced a ‘Cherry Guevara’ lolly.

This appropriation of Guevara’s image shows how he has become the ultimate symbol of disaffected youth, according to Vicky Bullen, chief executive of Coley Porter Bell. ‘It is the icon of youth, a symbol of the 1960s, which represents youth’s ability to change the world around them. It stands for challenging power,’ she says. This makes it a perfect emblem for brands attempting to promote youth values and claiming revolutionary properties for their products. 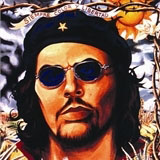 In modern times, the image has been rediscovered by a new generation. The success of the film about Guevara’s life, The Motorcycle Diaries, has added to the current bout of Guevara-mania. As a revolutionary icon, the image has gained currency with the wave of socialist governments elected in South America.

While other iconic images, such as those of James Dean, Marilyn Monroe and Jimi Hendrix, have become faded, and David Beckham’s iconic status is likely to be short-lived, Guerrillo Heroico remains full of intensity and passion. So perhaps it’s not surprising that designers and marketers in the West cannot resist appropriating Guevara’s image as they try to give significance and depth – and perhaps a little irony – to brands targeting the young.