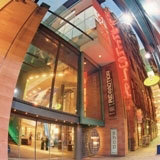 The hunt is on to find a new director for Scotland’s national design centre, The Lighthouse, following the announcement that founding director Stuart MacDonald will be leaving next month.

Final details of a revised job specification for the post are set to be hammered out later this week at an internal meeting of Lighthouse board members.

MacDonald, who led the £13m development and opening of the flagship design centre during Glasgow’s supremacy as UK City of Architecture and Design in 1999, is returning to academia.

In July, he will become the new Head of Gray’s School of Art for Robert Gordon University in Aberdeen, where he was an undergraduate student of fine art.

The Lighthouse is hoping to appoint another ‘all rounder’ like MacDonald by early summer, though it is not expecting to make any ‘significant changes’ to the high-profile role, according to Janice Kirkpatrick, chairman of The Lighthouse Trust. The position will have a broad specification, she says. With another individual at the helm, there may be scope to steer the national design centre in an alternative direction as the organisation evolves.

MacDonald will continue to sit on a sub-group of the main board to advise on appointing a replacement. Expressions of interest have been received from people both in the UK and abroad. The new director will take up the post in autumn.

‘The job has changed over the years, but the key task is how to inject leadership into all its different aspects. The main priorities will be building on the organisation’s success and implementing projects such as the Six Cities Design Festival,’ says MacDonald.

During his reign at The Lighthouse, MacDonald was overseeing the growth of the organisation, spearheading multiple initiatives, including the launch of its Creative Entrepreneurs Club and a comprehensive education programme. He joined The Lighthouse as its first director in 1998, prior to its opening in 1999.

MacDonald is a board member of the UK Design Council and the Sector Skills Council Creative & Cultural Skills. He was recently made an honorary fellow of the Royal Institute of British Architects and is an external examiner at the University of Dundee.

• Hosts Creative Entrepreneurs Club for practitioners in the cultural industries