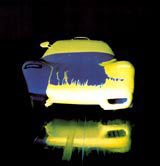 If you subscribe to the view that improbably fast, flashy and expensive sports cars are basically penis substitutes, then the McLaren F1 has to take the biscuit as the biggest boys’ toy available.

It may not look as phallic as classic designs such as the E-Type Jaguar, or even the all-show-but-no-go 1970s era Chevrolet Corvettes, but the McLaren does take a muscular posing pouch approach to styling.

This car is all about size. The numbers involved are big: the engine develops 627 brake horsepower (an average hot hatchback can get by with 130), the engine has 12 cylinders, and the top speed is comfortably in excess of 230 miles per hour. The front wheels are nine inches wide, if you feel the need to compare them to anything.

Ironically, the car is diminutive in overall size: the design team, headed by Gordon Murray, has pulled off an impressive feat of packaging, even managing to squeeze in three seats by using a central driving position. And every component of the vehicle, down to the bespoke Kenwood sound system, has been engineered for minimum weight.

But fear not: design group The Team, which created the original brochures and publicity material for the car, has now created a book to celebrate its success as both a road vehicle and a Le Mans-winning racing car. The McLaren experience is now available to Ford Fiesta drivers.

Driving Ambition, the Official Inside Story of the McLaren F1, makes an interesting design case study. After agreeing on the brief for the car, Murray had to fight hard to maintain the original vision. He avoided the temptation to develop a racing car and adapt it for road use, insisting that practicality would be compromised. When the race programme began, the team adapted the road car for the racetrack, and won convincingly.

The reader is taken through the development of prototype cars, named Albert and Edward, used to develop the brake and transmission systems; through consultation sessions with drivers of other fast cars; testing sessions and the frustrations of developing a groundbreaking car from scratch.

The book also looks at features that are unique to the McLaren, such as the modem which alerts the McLaren factory if the car breaks down and allows remote diagnostic testing, and the oh-so-necessary titanium toolkit. The tailor-made luggage is also mentioned. Strangely, nobody queries why buyers of the world’s most exciting car would want to fit a bag of golf clubs in it.

The book itself is handsome and glossy. It uses high quality paper and a selection of slick photographs, but the visual style is similar to that of car magazines. This impression is enhanced by the use of launch photography originally printed in these car magazines.

It does reflect much of the McLaren machismo, however. In keeping with the nature of its subject the book is a hardback, and of greater girth than the traditional A4.

Driving Ambition, the Official Inside Story of the McLaren F1, is published by Virgin Books, price £30.

Pointsize comes up with a pint-sized offer