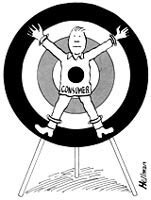 I got a mailer from Adobe, Hewlett Packard and Apple. On the envelope it said, “Get ready to change your identity.” An offer I couldn’t refuse… to open.

Inside, the folder’s cover proclaimed “Realising your creative identity”. Note: not the message on the envelope. Not changing my identity but making the most of it. An implication that I hadn’t yet done that. Further intriguing statements unfolded. “Are you ready to set new trends?” (Yeah – but meanwhile, what about my new identity?) “Who will you be a year from now?” I’d like to be David Bernstein (no accounting for taste).

However, the text revealed that they weren’t talking to me as a person. “The organisation you become a year from now may have little in common with who you are today.” Give them three hours at the Mermaid Theatre and they’d see to that. (Mermaid – now that’s a change of identity!)

But the accompanying letter didn’t talk to me as either a person or a company. It began thus: “Dear Target”. Dear Target? That’s on a par with “Dear Punter” and marginally less offensive than “Dear Sucker”.

Or could it be a mistake? Had I been sent an uncorrected draft with the equivalent of “recipient’s name goes here”? Or was I out of touch? Was this a development I wasn’t aware of? How could I set a trend when I didn’t even recognise one?

I needed counsel. I rang a colleague 20 years my junior, a working art director. He recognised it at once. “‘Dear Target’ is an example of the New Brutalism,” said Paul Eastwood. “It’s marketing catching up with architecture circa 1960.”

Be that as it may, I still think it’s an insult. Though perhaps not as pointed as the one I had received two days earlier.

I had intended this month to write about the new Croydon tram. I contacted the Tramlink Information Centre, requested an interview with someone knowledgeable and mentioned this publication. I was given a name and number and began a succession of calls. Each respondent (understandably busy with the launch, a few weeks away) suggested somebody else in another part of TCL, the consortium of six corporate shareholders tasked with the design, construction and running of the system.

Eventually I traced the key interviewee. His response was immediate. “You are at the bottom of my priority list.”

My preoccupation with politeness has a professional dimension. I remember seeing a TV documentary on the decline of industry on Wearside in the North East. A lady in a working people’s club linked it to another decline – that of manners. It seemed like a strange connection until I considered that at the heart of manufacturing is a concern for the other person, the customer. An understanding, an empathy even, a respect.

To judge from their preliminary literature, Tramlink designers – if not their appointed spokesmen – seem to appreciate this. The vehicle entrance is at the same height as the tram stop. Wheelchairs, buggies and shopping trolleys can be wheeled on and off. Wheelchairs need not be strapped down: the trams “accelerate very smoothly and… stop gently due to their three separate braking systems”.

Ettore Sottsass says design “must help people somehow”. RitaSue Siegel, a US design authority, calls the designer “the user’s advocate”. When designers get close to consumers it should be to get inside their everyday lives and see with their eyes.

The result is more likely to be what Victor Papanek calls “design for the real world”. In his book of that name he quotes another guru, Henry Dreyfuss: “For years in our office we have kept before us the concept that what we are working on is going to be ridden in, sat upon, looked at, talked into, activated, operated, or in some way used by people individually or en masse. If the point of contact between the product and the people becomes a point of friction, then the industrial designer has failed. If, on the other hand, people are made safer, more comfortable, more eager to purchase, more efficient – or just plain happier – the designer has succeeded.”

In my book the designer is less likely to succeed if he or she starts out regarding the user as a target. I can’t imagine any of the designers I’ve mentioned thinking like that.

Respect for the consumer fits unhappily with the New Brutalism. The latter cohabits with lager louts, mobile phone predators, leaking headphone wearers and other usurpers of private space. Paul Eastwood has designed a type font especially for them. It’s a new face called IN YOUR.

Fashion welcomes origami into the fold