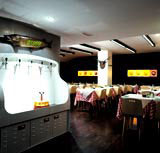 ‘We worked really fast and without an architect. We started in August and finished in mid October. I’d worked with Peter (Stavri) on another project, the Belgo Bierodrome on London’s Upper Street, so we knew Chameleon was flexible and good at last minute amendments.

In my opinion, many of the high end designer teams and architects do not know enough about the fiscal pressures the client has – especially in restaurants, because from the day you acquire the site you’re being charged for it, so you have to complete the job as soon as possible.

The real problems were caused by adapting to the requirements imposed on us by the landlord. There was massive pressure and ridiculous lease requirements on the insulation. Walls got smaller, heights got lower all the time: you couldn’t make holes in ceilings because you would be breaking into the sound insulation – £70 000 was spent on sound insulation alone. The original walls had to be insulated with 15cm of foam. The other problem was the front elevation – a box of glass in front of another wall. And we had to retain a fire escape because we have more than 60 people seated on the top floor – more of a design than a building problem.

As far as expectations go, Chameleon delivered. But I think Peter needed a better internal team of draftsmen, that is, house architects.

They couldn’t cope with the speed of changing design in producing accurate measurements. But because Peter and I do have a good relationship we managed to bridge that gap and make it work. If we had to do this project again, I’d bring in a very good run-of-the-mill architect to work with Peter, to do all the drawings.

Peter probably wouldn’t have done the project if he’d seen the problems he was going to walk into. But, to me, there’s no one else in the business as good as Peter.’

‘To be honest, a lot of people wouldn’t be able to work with Denis, he’s a very demanding sort of person who’ll ring up with issues at 1am – we needed to be constantly alert to the changes!

Luckily, I’m the same way myself, so we can find a way of working together – we certainly understand each other.

The main problem wasn’t design, it was the sound insulation. The whole building has been soundproofed as much as you would a recording studio because of the landlord’s requirements – in any other restaurant you wouldn’t have to do that.

Space also created problems because there were so many different trades-people working there, though a lot of the people inside were our own team. The site was so small, it made it very tricky. But I think it works well as an intimate- style restaurant.

Working on it was a big challenge. We did the Atlantic Bar & Grill and the Criterion fit for Marco Pierre White, both huge by comparison. But you need the same number of people to do the work, whether it’s big or small.’