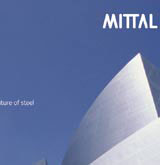 FutureBrand has created a corporate identity for the industrial giant Mittal Steel Company after its merger last month.

The consultancy was awarded the commission after a four-way pitch against Wolff Olins, Interbrand and Identica.

With an annual production capacity of 70 million tonnes, Mittal Steel Company claims to be the world’s largest steel business, formed by the merger of US International Steel Group with LNM Holdings and ISPAT International.

After winning the pitch, an eight-strong team from FutureBrand was charged with the creation of a brand personality that reflected the company’s heritage and future ambitions. The task included consultation on strategy, positioning and design for the company.

The new identity, which seeks to reflect Mittal Steel’s brand presence in everyday life, is also featured in all Web and literature applications.

FutureBrand executive creative director Tay Chong Huang says the aim was to develop a strong, but straightforward logotype that manages to be modern in both look and feel.

Another goal was to incorporate imagery that illustrates the end applications of steel in communities and businesses, rather than steel production itself (brochure pictured below).