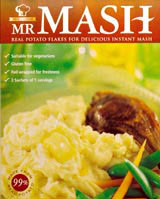 Sieberthead has redesigned the packaging for instant mashed potato product Mr Mash, to reposition it as a ‘premium’ product and broaden its appeal.

The revamped packaging, which hits the shelves in about two weeks, is designed to improve the visual appeal of Mr Mash on-shelf and introduce it to a new generation of instant mashed potato eaters, says Sieberthead account director Billy De Klerk.

The consultancy is aiming to build on Mr Mash’s ‘superior’ quality and promote it on a ‘premium taste platform’. The product is based on flaked, rather than powdered potato, has no additives and is 99 per cent potato, claims Sieberthead creative director Keren House.

‘The biggest challenge was to compete with rivals such as Smash, which is present in every British psyche,’ says House.

Copy was minimised to reduce clutter and recipe suggestions have been removed from the back of the packet.