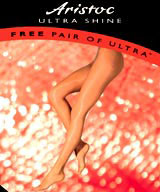 We are wearing tights less and less as a nation. But it doesn’t deter Jo Boyer, marketing manager of hosiery brand Aristoc. ‘Why are we wearing less? Because of these things,’ she says lifting a leg and pointing to her cropped black trousers. Obvious as this fact might appear to the female population, for the rest of us it takes a little longer to compute.

Wearing three-quarter length trousers is a shrewd move on Boyer’s part because it means she can still sport a seasonal glowing red pair of Aristoc’s underneath for all to admire. It’s perhaps also symbolic of some of the more recent efforts of the hosiery sector, which has been forced to look for alternative and innovative markets in these liberated times.

Nowadays, with some help from Boyer and Sara Lee Courtaulds’ main rival M&S, tights have been given a new lease of life. They are not just for showing off legs inside skirts these days.

Tights can flatten tummies, tights can be worn open-toed and, believe it or not, tights are available with a ‘clinically proven slimming action’ (apparently based on a slow release system of vitamins and minerals). Who knows what could be next?

Boyer joined Aristoc four years ago, before Courtaulds Textiles was acquired by the Sara Lee Corporation in May 2000. The merger created a pool of sister brands in the hosiery and underwear sector that would challenge the marketplace. Boyer estimates that they now account for 25 per cent of the hosiery market, alongside M&S which has another 25 per cent.

Since her arrival, she has strived to bring about a repositioning of the brand, to appeal to real women. The marketing ethos of the fashion brands, for what it’s worth, is something like modern practicality with glossy sensuality delivered with a slice of wit.

Full leg shots have, and always will be, an essential feature on-pack, Boyer explains, because women need to see exactly what it is that they are getting when they purchase.

She lives and works in Nottingham, from where she hails, and manages a good slice of commuting to London. Describing her background she paints a picture of a career fuelled by on the job success. Forget MSc’s in marketing strategy (though there was a National Diploma), Boyer began her marketing career in 1984 at Nottingham behemoth Boots The Chemists as an assistant marketing manager.

She then moved her way up through the ranks to become a buyer, first on own-label toiletries, then on sunglasses and ladies accessories, which are sold in alternate seasons.

‘I was responsible for creating the design brief, doing the research and actually presenting the concept to the designers,’ says Boyer. ‘We worked with [Pentagram’s] John McConnell, who heads up the Design Policy Group which was set up for Boots. You had to present your concept to him and he would select the relevant [design consultancy] off the Boots’ approved list.’

Working with McConnell was an education for Boyer, though she says that the design management process might have benefited creatively from more flexibility.

Ambition has also played a big part in her career to date. It takes a certain type of person to pack in the job to have a baby – as she did in 1997 – and then set up a limited edition teddy bear shop in Nottingham just to ‘pass the time’: as an entrepreneur’s daughter, she always had the urge to try her hand at setting up a business – and though it was a success for a few years, ‘it’s out of my system now’, she says. Her next move was to Aristoc.

She ponders whether designing for hosiery is a female domain, then points out that when she joined her department it was full of men. Now, she notes, as if realising it for the first time, the women outweigh the men.

It’s not so much about being female or male though, as understanding the brand, she says at last. Since men are not exactly the core target market however, she does feel safer if women are involved in the creative process.

Boyer is perhaps the original career woman. She even admits to being a product of the golden era of Thatcherism, and used to laugh with her friends that she had the dream job. Now though, she has become more discerning, more philosophical perhaps.

She is probably as organised and efficient as she’s ever been, but since her daughter was born, she has realised that there are some things work should not get in the way of.