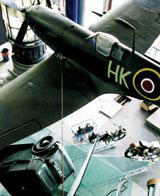 Although projects have been planned and managed since the dawn of time, modern project management began in the late 1950s and early 1960s when the size, scope, duration and resources required for new schemes began to demand more than a flow chart and a conference table. Initially limited to the engineering and construction industries, the phrase ‘project management’ has slowly crept into the vernacular and in the world of design, project management now plays a pivotal, if invisible, role.

Nick Fraser, who heads up Fraser Randall Productions and specialises in getting museums, visitor attractions and branded exhibitions off the ground, explains, ‘You should ghost the project along – after all, at the end of the day, who are you? You haven’t written it, designed it or paid for it’. Such modest words belie the level of involvement the job requires. ‘Project management’ is a nebulous term that is used to describe an array of skills: a mix of creative awareness and sound commercial experience is required, and alongside these, nerves of steel and an ability to deliver on time and on budget.

While project managers working in the construction industry are largely dismissed as a grey administrative resource that monitors the situation and reports to the client, those working in the exhibition and communication sector insist their role is more creative and dynamic. Brought on board at early concept stage, a good project manager is instrumental in appointing a core team of professionals, and by assuming the role of creative director or masterplanner, can even help to create the concept brief.

Just as the job entails a fairly broad approach, there is no one typical candidate profile, and project managers tend to arrive at their career via a variety of routes.

Fraser’s background in the theatre has no doubt contributed to his ability to pull a large team together. Starting out as a lowly stage carpenter in Glasgow, he moved to London and worked as an assistant production manager on the likes of mega Lloyd-Webber shows such as Starlight Express, before being snapped up by design consultancy Imagination, where he headed up its special projects division.

Since starting his own company in 1989, Fraser has worked on a variety of projects around the UK and in Europe. The brightest feather in his cap is Think Tank, a £50m science attraction in Birmingham’s Millennium Point due to open at the end of this month, but his portfolio bears the scars of some rather difficult projects along the way – notably the Millennium Dome, where he structured and organised four zones. ‘The Dome has provided me with the perfect benchmark for how not to do things,’ he jokes. ‘When planning and politics are tightly related, you run the risk of the concept and creative content being diluted. At the Dome there were too many people involved, but not that one key person.’

Although he walked away from the Pop Museum in Sheffield, saying, ‘the emphasis was on creating a landmark building and the content and communication were secondary,’ – he worked on The National Football Museum in Preston, which has been criticised for lacking focus and content. In defence of the problems inherent in such projects, he explains that more traditional clients often have clearer objectives. ‘Most museums have their own collections,’ he points out. ‘They aren’t just batting from zero.’

Large public collections can pose their own problems too, and presenting them in a new and exciting way can prove rather difficult. Getting bums on seats – or people through turnstiles – is a real priority at the Victoria & Albert Museum, where the revamped British Galleries are due to open on 22 November. The scheme necessitated the mind-boggling task of cataloguing and re-housing 8000 precious objects during works, while the Grade I-listed structure remained open throughout.

Masterminding the operation was the director of projects, Gwyn Miles. Having joined the V&A 16 years ago as a conservator, she brings a measured, steely-calm approach to her role, which involves overseeing such prestigious additions as a new architecture gallery, on track to open in 2003 and Daniel Libeskind’s headline grabbing Spiral, due to open in 2006. She defines a project manager as ‘the person who has to make sure all the components of a team are monitored and work together’.

The coordination of the British Galleries has been a mammoth task, involving orchestrating an entire team, both in-house and sub-contracted, to work together. Miles hand picked the curator, museum operations manager and the design team that comprises design group Casson Mann, architect Alistair Gourlay, interior designer David Mlinaric and curatorial consultants John Cornforth, Christopher Gibbs and John Harris. Managing a budget £31m, she took the executive decision that it was e e cheaper to do the job in one fell swoop, rather than as a phased project.

Trying to keep a project together when it is on the move is an entirely different matter. Alice Cicolini is a project manager in the design department at the British Council, which was set up five years ago to promote British design abroad. As such, her remit involves organising exhibitions that tour the world. With a background in PR and marketing for the likes of Tom Dixon, her role straddles that of curator, arts development officer and consultant. Her team is forced to rely on the relationships they foster with arts partners overseas and working with existing infrastructures, they may not visit the venue until the opening night.

An awareness of cultural differences between host countries is vital. When an exhibition tours, it moves only within compatible countries with similar levels of understanding and sophistication, so the message remains relevant and meaningful. Last year, Cicolini was responsible for Inside Out, the Branson Coates-designed show featuring underwear by Marks & Spencer, Agent Provocateur and Seymour Powell’s Bioform bra for Charnos. It is still touring the globe, and has already been seen in Tokyo, Lithuania, Moscow and Helsinki, but is unlikely to make an appearance in some destinations. ‘It’s not just about saucy pants, we wanted to show some interesting industrial design from this country, but it would have been politically difficult to take it to India,’ Cicolini concedes.

Exacting preparation is key when working abroad. The team always requests detailed floorplans of the chosen venues, and regular design meetings are held to ensure core requirements are met. Size and weight are important issues – the show has to be installable by a maximum of four people and crates have to be liftable by two. Every show comes with its own lighting and electrics and all copy has to be replaceable for translations. In general, the exhibition is built in the UK, flat-packed and shipped to its destination. But when it is built locally, clear drawings are faxed to ensure there are no nasty surprises on opening night.

As well as dealing with the glamour – and the ego – of the design team, a certain amount of bureaucracy and red tape comes with the job. With touring exhibitions, the team also has to deal with headaches involving customs and freighting.

Cicolini views the ability to stay calm in a crisis as one of the most important requirements of her post. ‘Sometimes you turn up and things are missing so you need to source help locally last minute. You always have to have a solution for everything,’ she points out. ‘Never trust the estimates from companies who promise faithfully they’ll clear customs in two days – I’ve had exhibitions caught in typhoons – you’re in the lap of the gods.’

Know when to delegate – and when to interfere

Secure adequate funds – if you can’t get the money right, you’re project will be a non-starter

Allow more time than you think you need

Don’t ever believe they’ll get it right tomorrow

A strong, single vision and idea is paramount: at the Millennium Dome there was no unifying idea so no one knew what was going on

Loosening up the client is sometimes a must, as is reigning in the design team