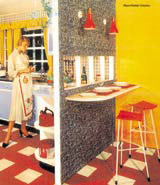 Wayne Hemingway states baldly in his introduction: ‘As a designer, it has taken me 20 years to rid myself of elitism and design snobbery.’ Hemingway champions many things that others call kitsch or tasteless, perhaps because he correctly identifies such criticism as being mostly class-based. After all, if someone wants a furry toilet-seat cover – in a non-ironic, really-wanting kind of way – then why is that worse than someone else’s choice of an Eames chair? Only the rich can afford an Eames chair anyway.

But then, reading through this chucklesome and often shrewdly-judged book, there are other statements that make you question that opening statement. Hemingway doesn’t like lava lamps and doesn’t understand their huge appeal. He admits he doesn’t quite get it with coal-effect electric fires, either. ‘It’s beyond me why an unobtrusive radiator can’t suffice,’ he sniffs. Well, OK, so Hemingway has a highly nuanced position on this and, as he says, he doesn’t like everything he writes about, nor does he expect us to like everything he does.

But here’s the clincher: Hemingway comes right out and says: ‘I have got a thing against net curtains. It seems pointless having windows if you are going to shut out the world.’ I am aghast at this. Hatred of net curtains is the calling-card of every elitist design snob there is. Net curtains allow nosy neighbours and lonely grannies alike to see out while making it difficult for others to see in.

In this function they are no different from the carefully-angled Venetian blinds of the design-aware, only a lot cheaper and easier to clean. I would have placed a large bet on Hemingway just loving net curtains.

But I’m with him on much else. Just the words ‘moulded splashback storage’ make you smile. The Teasmade has an admirably Heath Robinson quality. And yes, paper globe lampshades are timelessly effective. But what really underlies this book is simple nostalgia, particularly for the gaudy, naive designs of the 1960s and early 1970s. Hemingway is always talking about the stuff his parents bought. He likes it because he associates it with what seems to have been a very happy childhood. You wonder if he would have turned into a sneering design snob if he’d really hated his mum and dad and all they stood for.

So it’s an ambivalent book, this one. Hemingway often pokes gentle fun at the very things he puts before us as classics: he can’t resist being snide about serving trolleys. Elsewhere, you suspect he has tried hard to suppress his own innate good taste and sense of style in order to convince himself that something conventionally schlocky – a three-piece carpet toilet pedestal set (pictured above), say, or the useless Corby electric trouser press as found in most bad hotels – is really quite OK. The question is: does it matter?

Not really. It’s a well-honed knife edge that Hemingway is walking here, and the enjoyment of this book is watching him do it. He falls off a few times but (ouch) manages to scramble back on again. And who, after all, can dispute his selection of the vertical-concertina wooden clotheshorse as a truly great design to be compared with the Trojan Horse of the ancient Greeks?

Mass-Market Classics: a celebration of everyday design – The Home by Wayne Hemingway, is published by Rotovision, priced £16.99