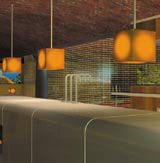 ‘There’s a good buzz in Liverpool,’ says Richard Eastbrook, and he hopes that R2 Architecture will be in the thick of it. The city has just been awarded Eu

ropean Capital of Culture 2008, a win, which the city’s burghers are describing as the beginning of a thrilling renaissance for the city.

The event is expected to create 14 000 jobs, generate £2bn extra investment and bring 1.7m extra visitors to the city. All of this is excellent news for a bar designer.

Eastbrook has been back in his hometown since 1996. A year ago he left the much-acclaimed Liverpool group Union North to bite the bullet and go it alone. It helps to have a client on-board in these situations, and Eastbrook had built up a fruitful relationship with the Lyceum Restaurant Company.

His major debut as R2 will be for this operator, when Babycream opens at the end of October (DW 4 September). A partnership between Lyceum and the Cream nightclub, the bar is potentially the first in a chain.

Eastbrook has been put in charge of the conceptual development and delivery of all the bars, and already has designs for Babycreams in Leeds and Manchester, opening in January 2004 and March respectively. If all goes well, continental Europe is even on the cards.

This is a solid start for R2, but that’s not all that Eastbrook is up to. As a one-man band, he has plenty more on the drawing board.

He’s on-site with a bar for Radisson Hotels’ latest five-star offering – the first hotel in Liverpool to boast so many stars – is coming up with a scheme to convert St Peter’s Catholic Church in the city into a bar and restaurant; is in discussions regarding a new hotel; and is also working on something for his old boss.

Relations are obviously cordial between R2 and Union North, as Eastbrook is designing a fancy-sounding glass-roofed extension to his boss’s Cheshire farmhouse.

Eastbrook joined Union North in 1999, and there cut his teeth on hospitality. He worked on the deluxe and award-winning Pan American Club at Liverpool’s Albert Dock for Lyceum, as well as a television studio in Toxteth.

Before that, he was with the mainly residential David Kirby Architects, also in Liverpool, having spent most of the 1990s gaining experience in New York, Berlin and Singapore. One claim to fame from that period is being able to count the Sultan of Brunei among his clients. While at GMI International he was involved in a new 360-roomed palace for the sultan.

But despite this international experience, he was keen to return to his roots. ‘Lots of people in their mid-30s who stayed in Liverpool are doing well,’ he says. ‘They’re seeing it through, rather than running off to London thinking that’s the only place you can do good design.’ He says. ‘And there are benefits for designers,’ he believes. ‘As Liverpool is smaller, you can affect things more quickly, and be part of real change.’

Despite all these different influences, Eastbrook claims that he doesn’t have a particular design style. ‘Instead, I’ve got a lateral approach,’ he says. Most good work comes, he believes, from a healthy tension between the space, the client and the ideas.

This is exemplified by the design evolution of the first Babycream at Albert Dock. The project went through a number of incarnations before the final solution. Its first manifestation was too male for the mixed target audience, so Eastbrook tried to feminise it. That process actually diluted the original idea, so he started again, this time creating two distinct spaces for the male and female audiences. Seating, lighting and the level of service vary depending on the area. How the clientele take to their designated spaces remains to be seen.

He hopes that this lateral approach will work well in collaboration with others, for rather than growing R2, the intention is to collaborate with like-minded designers. He’s already got his eye on Copenhagen-based consultancy Loop, which was formed by a Dane and a Swede whom he introduced to each other in New York.

So Babycream in Liverpool will be the first project to come to fruition for R2. Eastbrook has a steady stream of projects that will follow on from this, and just as long as other clients like what they see and show an interest in this new design venture, then the order books will remain healthy into the future.