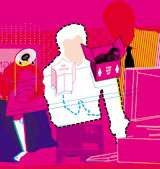 In a deflated job market, senior-level moves usually retain a greater degree of buoyancy. Chief executives often take the rap for poor performances, and good creative directors are always in demand. So, as the market starts to pick up, the rate of top-end people-moves looks set to grow even faster.

‘The past few years have been pretty static, but the past few months have picked up considerably – even during August, which is traditionally a quiet month,’ according to Major Players director Paula Carrahar.

Moves are closely watched when they involve switching between client to consultancy, and vice versa. Franco Bonadio and Jon Turner, who joined The Body Shop after working at Corporate Edge and Boots the Chemists from Enterprise IG respectively, as well as FutureBrand chairman and chief executive John Elkins, who left for Visa International, are all well-known examples.

‘Clients always request senior people from consultancies, as they are believed to have good all-round skills,’ says Carrahar. ‘It’s very common. They pick up on people who’ve left groups and ask us to find them.’ The reverse is ‘less common’, she says. US headhunter RitaSue Siegel agrees. Moving at a senior level from a client to a consultancy is ‘very difficult’, she says. ‘Groups assume people have developed a different, not necessarily complementary, set of skills.’

Spencer Stuart partner Jan Hall, who headhunts clients, disagrees. She says a move from consultancy to client is ‘virtually unthinkable’. ‘It would only happen if personal contacts were involved,’ she says.

On top of this there are inter-consultancy moves. Jon Edge joined Interbrand as design director on 1 September from Wolff Olins, where he was senior designer (DW 4 September). He was headhunted, and admits there was a degree of serendipity involved in the timing of the approach.

‘I wasn’t on the job market, but it’s naive to think people happily in a job are never looking to move,’ Edge says. ‘You constantly benchmark yourself against others and set timescales for yourself. And after five years at Wolff Olins, and after the departure of [g

ood friend] Robbie Laughton [to set up Dave], it felt like a chapter had closed,’ Edge says.

Jane Simmonds, who in August moved from Fitch London where she was chief executive, to Conran Design Group as client services director, believes it’s tougher for recruiters if their top-level targets are not looking to move. She used personal contacts to move to CDG, rather than a headhunter. ‘It’s a chicken and egg situation. If people are trying to move on, they’ll already be actively looking. If they’re not, they’re usually not interested,’ she says. ‘Those with the best reputation are usually happy where they are, and it’s difficult to recruit them.’

Once you’ve decided to move, there are a few options for senior-level figures, says Edge. ‘For a start, there’s the decision whether to stay in the UK, and whether to work client-side or with a consultancy,’ he says.

‘There are more opportunities abroad at present, especially Australia, the US and Far East,’ he says. But he wasn’t tempted this time. ‘I’ve not contributed enough in London yet.’ A move client-side wasn’t an option either. ‘Unless you’re at James Dyson’s level, it’s harder to maintain freshness with just one “client”,’ he believes. ‘I think I’d be bored, it’s not for me.’

If you’re a senior executive moving to a larger company, the chemistry factor at that level is hugely important, he says. ‘It’s always a two-way process. You’re interviewing each other.’

The recruitment process can take a long time, Edge adds. Out of respect to Wolff Olins, he won’t say how long it took him. But according to Siegel, it takes three to six months. ‘There are lots of reasons why the process can be drawn out,’ she says. ‘Children’s schooling, relocations. Often people wait for a natural pause in their life to change jobs.’

Here, four individuals explain why they changed jobs, how the move came about and how they perceive the differences between client and consultancy work.

‘At the beginning of April, I was approached by Dutch headhunter Henk Mastwigk, who wanted to know if I would be interested in a job in Amsterdam. At that time I had been working at the London office of FutureBrand [following the acquisition of Coleman Planet by FutureBrand in March 2000] for nine months and had not intended to go elsewhere.

Up until then the job had offered many challenging projects that involved a lot of travelling, and I enjoyed the dynamic atmosphere of London. But the offer got increasingly tempting as it became clear that I would be able to combine my creative and commercial talents and that it would allow me to implement my visions and ideas.

Design Bridge is a privately owned company with a good team spirit, where the younger generation is involved in the company’s future. Compared with many other international design consultancies, Design Bridge has remained totally independent and therefore has the luxury of shaping its own course.

The most difficult aspect of moving back to my home country was perhaps that it came so soon. London life had just started to feel familiar. Fortunately, my new job offers the best of both worlds, an international perspective in a Dutch setting. It combines the strength of different cultures to create the best work for our international clients and their brands.’

‘I had spent almost 13 years building FutureBrand from a small entrepreneurial start-up to a major division within a large public company. We had grown from a company with 35 employees and two offices to one of over 700 employees and 23 offices worldwide. I felt I had fulfilled the vision I started with and was ready for a new challenge.

I wasn’t looking to move, and, in fact, it surprised me initially that I was interested in a new position [after being headhunted]. It was only after some introspection that I realised why I was ready to make a change.

The differences between FutureBrand and Visa are wide. At the former, I managed a variety of clients across a broad range of industries. In my current role at Visa, I have only one “client”, which allows me a much deeper focus on the business. In some respects, this position is no different to the work I did at FutureBrand – anticipating the future and successfully managing the brand.

On a more personal level, San Francisco is quite different from New York. I am enjoying the people, the weather and a much shorter commute. I have always been an active sportsman, so bringing the Olympics, Rugby World Cup and other terrific ‘clients’ into my business life is a real source of pleasure.

It was hard to leave behind a group of talented professionals and the culture we had created together with all the attendant folklore. The easiest aspect was having the appetite to learn the nuances of a (relatively) new sector. One of the best parts of this job is the brand culture within Visa, vital when you’re working with one of the most recognised brands in the world. It makes my job much easier.’

‘My decision in joining SAS was extremely straightforward. I was unexpectedly made redundant from Smith & Milton following a “restructuring” of its business to focus on packaging.

Hilary Springer, managing director at Springboard and one of my trusted headhunters for years, called me on hearing the news. She put me in touch with SAS managing director Jeremy Sice. I met him with a healthy mix of enthusiasm, cynicism and intrigue and then, over the next two to three weeks, met Nick [Austin], David [Stocks] and several other SAS people.

One of the most difficult aspects of moving job was having to write a CV for the first time in 15 years. But the easiest factor was the whole interview process, which was very positive. You get to have conversations about you, your beliefs and the business that you wouldn’t have in other situations.

It was clear early on that it was a meeting of like-minds. There was a real sense of integrity and ambition [at SAS], which, for me and my recent experiences, was hugely important.

Working for a consultancy rather than a client gives you experience of a wider variety of market sectors. And you can’t beat working in a business full of ambitious, hard-working and creative people. The energy levels are infectious.’

‘I had seven invigorating years working at Orange and it was a natural time for me to consider a new challenge. I’d been in talks with Finisterre for several months.

The move came through word of mouth. I’d previously worked with Finisterre managing director Sally Horrox and admired her achievements. This, coupled with Finisterre’s strong creative product and reputation of knuckling down, appealed to me.

My new role is an opportunity to bring client insight consultancy-side. Working client-side gives you a deep understanding of the workings of large multinational companies. This kind of experience helps put context around a consultancy’s role within clients’ wider business plans.

Having worked for both “sides” I’ve noticed people are quick to create false divides between people’s capabilities. At the end of the day it boils down to whether an individual is bright, creative and good at managing both people and situations.

Besides marvelling at my new Mac, the most significant difference moving was company size. The 20-strong team at Finisterre feels like a close-knit family compared to a company with over 30 000 employees. The diversity is rewarding, too. One minute you’re in a client presentation, the next you are making a board-level decision on the consultancy’s future.

The most difficult element of the move to Finisterre was ensuring that my old team at Orange was settled and that major strategic initiatives were briefed before I left. The hangover from the leaving party was pretty rough too.’