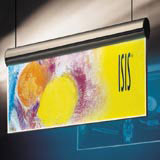 Two leading retailers are trialling a ‘revolutionary’ self-initiated signage concept by Glasgow-based Randak Design, and several other organisations are in talks with the group to take on the product.

Selfridges’ Future Systems-designed Birmingham flagship, which opened last week, and Edinburgh department store Jenners have both started trialling Isis, a patented signage product, which is unveiled to the public at 100% Design on 25 September.

Isis, which has taken six years to develop, is an illuminated, double-sided signage system with a ‘slip-in, slip-out’ function for paper graphics, designed to allow the user to change the message in an instant. An outer case houses a light unit and the paper infill is sandwiched between Perspex.