For several centuries, the human species’ gum chewing habit was harmless. Gum of the past was made from chicle, a kind of sap collected from several species of Mesoamerican trees.

Today however, most gum is made with plastic and chemicals like polyethylene, which is found in plastic bags and bottles. Unsurprisingly, the microplastics that are broken down from modern chewing gum can have a significant impact on both chewers and the environment.

In recent years, plastic-free chewing gum brands have begun to emerge as a healthier and more environmentally minded alternative. In a bid to differentiate these products from their plastic predecessors, designers are developing a whole new visual language, with a focus on storytelling and a departure from “artificial” graphics. 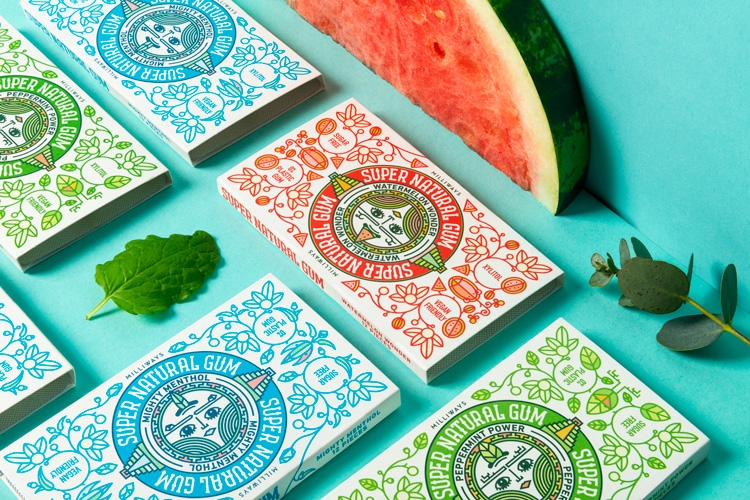 “So intriguing that people have to ask what it is”

By nature, chewing gum packaging is a small canvas to work on. James Taylor, founder and creative director of design studio Dearness Only, says this is why many brands opt for tried-and-tested visuals – such as blues and greens, gradients and shines – as a kind of “visual shorthand” for a product category with little space to work with.

When Dearness Only branded Milliways plastic-free chewing gum however, Taylor says the team approached it from a “literary” perspective at first, rather than a graphic one. 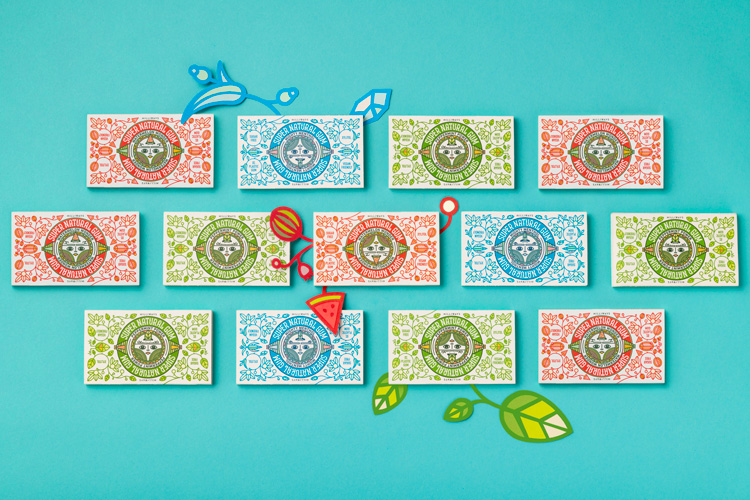 The Milliways name itself is a reference to The Restaurant at the End of the Universe, the second book in Douglas Adams’ Hitchhiker’s Guide series – Taylor says such source material meant the project “already had a footing for something off the beaten track creatively”.

Dearness Only worked a lot onto the tiny canvas: first, the team developed a backstory for a fictional “goddess” and universe, both of which inhabit the pack. The branding also includes artistic references to gum’s Mesoamerican heritage, as well as animals and star constellations. The point of fitting so much onto the pack was to create something “so intriguing that people have to ask what it is,” says Taylor. 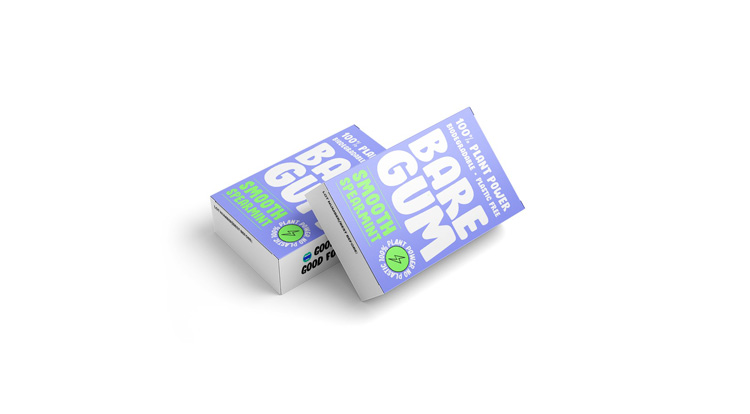 The graphics usually found in chewing gum branding convey “artificiality”, Taylor says. This is something Milliways wanted to avoid at all costs, he adds – an emerging theme for plastic-free chewing gum brands. Samantha Jones, the designer behind plant-based gum brand Bare Gum, says her work was inspired by nature and “plant power”.

“I read a lot about successful athletes, scientists and academics who were all stretching their bodies and minds and were powered by plants,” she says. “This inspired me to create a set of bespoke illustrations for Bare Gum featuring people in powerful stances and positions.” 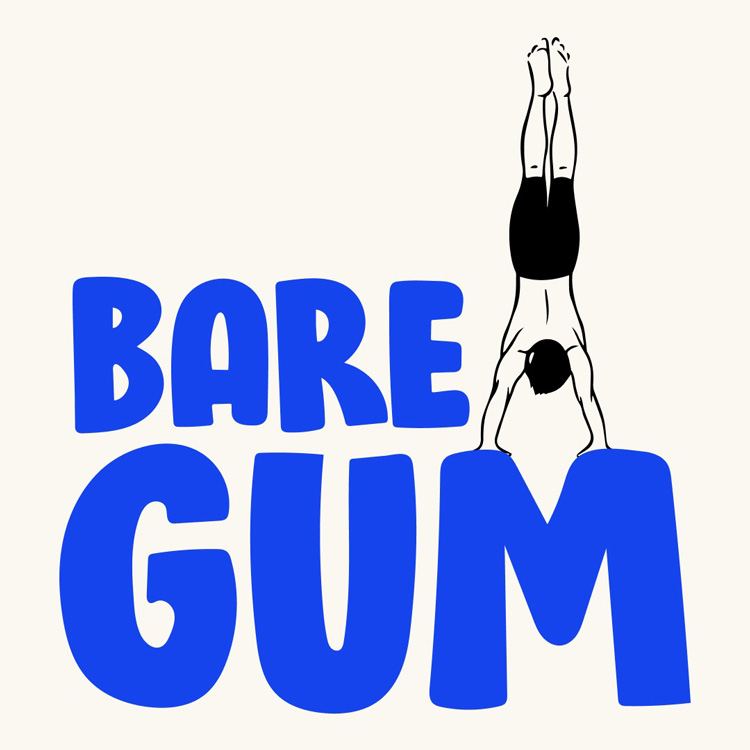 This idea was then further extrapolated into a concept called “Pocket-sized Powerhouse”, Jones says. “[The idea was] built around the knowledge that small acts can create big, powerful change,” she says. All design elements were informed by this storytelling concept – the brand name, for example, takes up “most of the packaging’s real estate”, which Jones says conveys the “large impact of the small item”.

Like Taylor, Jones says she was keen to avoid the stereotypical blues and greens of mainstream gum where possible. Of course, she admits it’s hard to communicate flavours like spearmint “without a lick of green”, but these colours have been used sparingly. Colours not usually seen on pack take centre stage, like lilac, red and yellow. 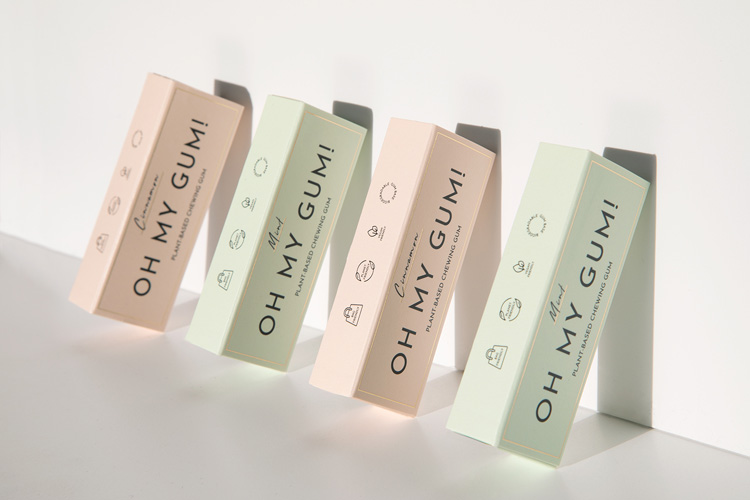 “We wanted it to look like a beauty brand”

While several brands like Milliways and Bare Gum are looking to establish a more natural visual language, others are heading in another direction. Oh My Gum!, for example, is looking to position its product within the luxury market, according to founder Malak Ben Hmeda. Together with graphic and product designer Kim Crowdy, she set about developing a “fashionable” chewing gum.

“We wanted it to look like a beauty brand,” says Hmeda, adding that fashion and beauty brands like Glossier, Herbivore and Acne Studios were inspirations. Like Milliways and Bare Gum, Oh My Gum! bucks the trend of toothpaste blue and mint green palettes. 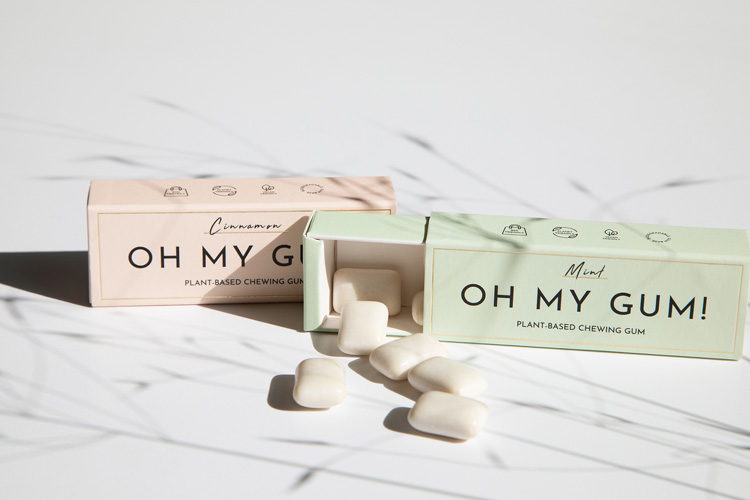 Instead, packaging and branding features a pastel colour scheme. She says the choice was “a mix of personal preference and what we felt our creative and stylish consumer would be attracted to”.

To add to the high-fashion look, the pair went for a simple all-caps wordmark, akin to fashion houses like Celine or Gucci. Hmeda says it was “aesthetically more elegant to spell it out”. 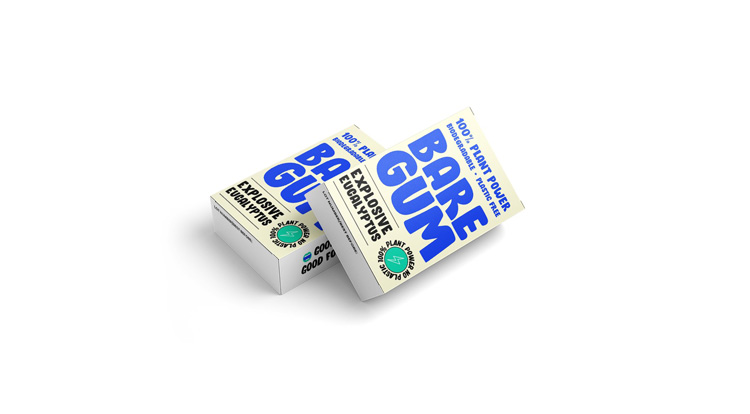 “Designed and made by people that really care”

Beyond the graphics, design is helping to fix some of the technical problems experienced with gum of the past. Hmeda and Crowdy for example, developed the packaging for Oh My Gum! to be “bag-friendly”. A buffer on both sides of the box serves to ensure packets are “completely spill-proof and crush-proof”. “It used to really bother me when chewing gum would spill in my bag,” explains Hmeda.

She says the design approach for Oh My Gum! was concentrated on “building new associations” around chewing gum. This is a sentiment Taylor echoes for Milliways. “There’s a problem with mainstream gum – it’s plastic, and it sticks to our streets and pollutes our world,” he says. “We needed to be able to announce to people that this kind of gum was different.” 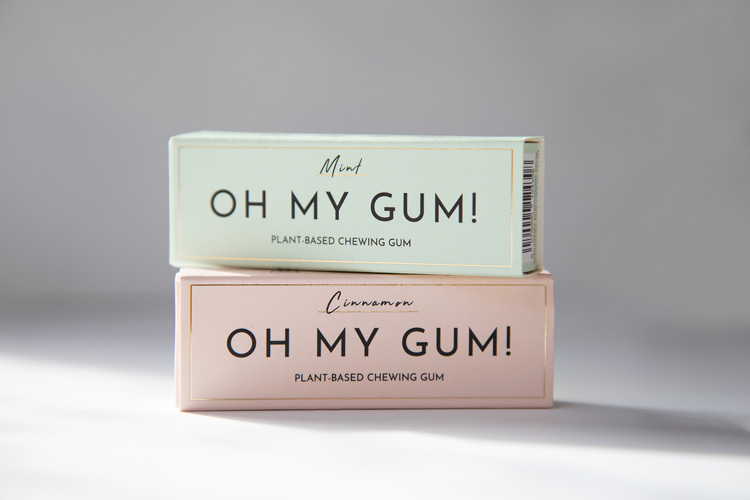 Acknowledging lots of designers work in FMCG categories that have defined aesthetics, Taylor says he has “nothing against the classics” when it comes to chewing gum branding. “Gradients and waves and blues and greens rule the roost in the category,” he says.

“But in the case of plastic-free gums, I think the desire is to create almost a hand-made look, to show it’s been conceptualised, designed and made by people that really care.”