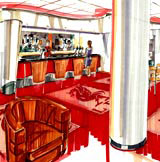 The continuing popularity of football and the economic necessity of increasing stadium capacities mean that the building of new ones and extensions to existing stadiums continues at a faster rate then ever before. This rise is presenting great opportunities for design groups to get involved in a sport that is now more aware of the role design has to play, both in making the matchday experience more exciting for supporters, and swelling the club coffers via big-spending sponsors.

Fulham is the latest club to be granted planning permission to build a new arena (DW 5 April), and a variety of clubs of different sizes, including Arsenal, Manchester City, Southampton, Swansea City and Oxford United, will all move to new grounds over the next few years.

Poulter Partners head of design, James Acton, worked on stadium branding for Newcastle United’s St James Park while he was at Robson Brown Design. Acton says clubs have a greater understanding of the need to create a stadium identity that extends beyond that of the main club brand.

“People are now seeking richer environments once they are in a football stadium. Wall fittings, signage, and so on are much more important and more sophisticated nowadays,” Acton says.

Eigg, which last year designed the interiors and visual identity for the VIP suite at Liverpool’s Anfield stadium, is currently talking to an unnamed football club about branding its stadium. Director Daniel Lister says branding designs have to work on a number of levels, including maximising a club’s commercial potential.

“You need to look at implementing subtle aspects of team colours and parts of the logo to build up the excitement for the supporter. We also try to use colour and branding throughout the stadium to excite people into spending money. What makes them spend more, or less, is the experience,” says Lister.

Acton agrees that clubs are increasingly forward-thinking in their business focus and says that they realise design has a role to play in the commercial process. “Clubs are realising the stadium needs to be branded, to broaden the scope of the venue and increase commercial viability. It’s a rejuvenation and re-engineering of the club brand,” he says.

Branding may be carried across all of the club livery including signage, corporate literature and websites, he adds. Permanent exhibition areas, including one at Manchester United ground Old Trafford, designed by RFA Designers and opened in January, are also providing opportunities for work. The consultancy is currently working on designs for a museum for Manchester City.

“In terms of signage, there are issues around functionality, but designs also need to deliver a message as well. For everything we do, we have to consider things like health and safety and crowd management. On another level, we want to reflect the awe and pride that fans feel when they arrive at a stadium – the emotional value,” says Green.

“If you were to do signage for Wembley, for example, you could illustrate Wembley’s finest hour – 1966 [when England beat Germany to win the World Cup] – and this would be a trigger for loads of other memories, as well as bringing in the functional ‘there’s my seat’ aspect,” he explains. Wembley, of course, is being rebuilt by Foster & Partners, with a new identity by Identica (DW 24 November 2000).

But, as is the case in other aspects of stadium design such as interiors and stadium branding, signage systems often need to be made relevant to other sports as well as non-matchday activities such as music concerts.

“If you have multiple uses for a stadium you have to deliver multiple messages, but it’s to do with degrees of emphasis,” says Green. “There is a fine balance between creating a signage system that is anonymous and one that works for the club which is using the stadium 99 per cent of the time.”

Andy Anstey, marketing manager of architect HOK Sport, which is involved with new stadium schemes for Arsenal and Everton as well as the new look Wembley, points to the need for interior design to reflect the 365-days-a-year status of stadiums.

While Anstey says most interior design at football stadiums are handled by the architect, Lister believes there is “a slow realisation among football clubs that if you want a specialist you look at an interior design consultancy rather than an architect”.

Lister confirms the need for multi-representational designs. “The suite we designed at Liverpool is used on match days and non-match days so the designs needed to ensure it wouldn’t look strange for its different uses. It needed a flavour of Liverpool Football Club, but not an overpowering or vulgar one. The visual identity also had to be modern, corporate and multi-functional but, again, not vulgar,” he says.

With clubs such as Manchester United constantly pushing the boundaries of football branding, from its stadium through to its merchandising, opportunities will continue to arise for consultancies. Clubs will have to continue to find new ways of exciting and motivating both its supporters and sponsors, inside and outside its stadiums, and design will be at the forefront of it all.