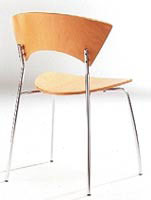 The furniture design industry is becoming increasingly parasitic as manufacturers try to cut costs, according to copyright action group Anti Copying in Design. It says plagiarism must be tackled from within the industry.

The news comes as Acid member, furniture designer and manufacturer Allermuir, wins a copyright settlement against shopfitter AES Refurb and its supplier Design & Contracts, which infringed the copyright of two Allermuir designs.

Design & Contracts was asked by AES to reproduce Allermuir’s Scala chair, designed by Danish architect Pernille Svane Hansen and licensed exclusively to Allermuir, and its Melfi stool, designed in-house, without permission and at a lower price.

Allermuir had provided AES with a quote for furnishing a restaurant in Kent’s Bluewater Shopping Centre, called Bitz & Pizza Sportz Restaurant, which was dropped at the last minute.

Design & Contracts has agreed not to manufacture or sell the copies and has passed design information, including prototypes, to Allermuir. It has also provided an undisclosed settlement figure.

Allermuir design and development manager Tim Lishman says, “This is theft of our designs and worryingly, a dog-eat-dog situation. It seems specifiers, interior designers and manufacturers have little concern for the health of their own industry.”

Acid chief executive Dids Macdonald says this type of case must be tackled from within the industry.

Acid launched an initiative last month, “Commission it – don’t copy it”, designed to tackle plagiarism in the industry. It is in the process of lobbying retailers, specifiers and hotel chains to clarify their copyright policies.

M&S to launch Per Una range