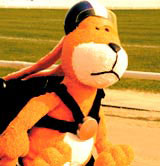 The BBC’s in-house design team, BBC MediaArc, has created on-screen branding idents for greyhound racing channel and website, GoBarkingmad. BBC MediaArc was appointed without a pitch by Internet development company Gaming Internet. It has designed an identity and idents based on ‘the unsung hero’ of greyhound racing – the hare – which wins every race, says MediaArc director Sandra Nicholson. Jim Henson’s Creature Shop was asked to design a hare puppet, which features throughout the screen sequences. The channel launches in June.