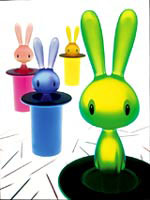 It’s no secret The Magic Roundabout was inspired by a hallucinogenic experience, but what mind-expanding drugs led to the creation of Magic Bunny? The designer toothpick dispenser was created by Stefano Giovannoni for Alessi, but is more likely to appeal to adults. Picture the scene – you’re hosting a dinner party and at the end of the meal you pass around the cigars, then the Brandy and then… the Magic Bunny. Followed, no doubt, by the magic mushrooms. Or did they come first?