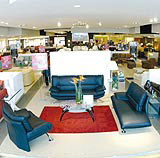 Poor product design and uninspiring store environments means furniture retailers in the UK are lagging behind other retail sectors, according to a Verdict report released this week.

The report says retailers are failing to capitalise on the housing and interiors boom. It forecasts growth for the sector in the region of 5 per cent over the next two years, but suggests furniture retailers could lose out to competitors in the DIY and fashion sector that are also targeting this market.

Verdict chairman Richard Hyman says the industry is full of ‘mediocre retailers and manufacturers’ that ‘haven’t done a good job of inspiring people to buy’.

‘Furniture is a market with a lot of potential, but retailers are not synonymous with dynamism and innovation,’ says Hyman.

The research suggests MFI, Ikea and Argos are likely to be success stories of the sector. But impending maturity in other UK markets has already led fashion and food retailers like Marks & Spencer, Next and Laura Ashley to target the home furnishing sector.

This will pressure companies like beleaguered Courts, which reported interim losses of £4.1m in its first half results last month, to invest in product and store formats to compete against these consumer-focused, design-led rivals.

Some retailers are alert to the problem. Kingdom of Leather executive chairman Peter Dickson, who joined the company in March 2001 with a background in fashion retail, says furniture retailers are ‘too comfortable’ and fail to deliver the design quality customers expect.

‘The furniture industry has been in a design rut, lagging far behind other retail sectors such as fashion. The industry has sunk into the lowest form of retail by emphasising price,’ he says.

Designers suggest furniture retailers lack ‘imagination’ and ’empathy’ and need to shift their focus toward customers.

‘Stores lay out by category rather than room set. They don’t use imagination and pay lip service to customer needs,’ says de Trense. ‘Furniture retailers sell furniture for homes and should display product in the way it is used at home.’

The Nest chairman Alex Willcock agrees the issue is store presentation rather than product design.

‘There are good products available at a good price. The bigger issue is presentation and a lack of empathy with consumers,’ he says.

‘There is a huge hunger [among consumers] for information and inspiration. The majority of people have no idea what it is they want because they’re not interior designers. But the majority of retailers don’t make any attempt to make it easier for them. There is a very big gap in the market [from what people want] to how stores are presented and the information that is available.’

Dickson agrees. ‘Furniture [retailing] has been commoditised and customers aren’t happy. Retailers need to be move from price led [formats] to inspiration,’ he says.