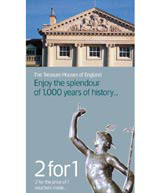 Steers McGillan has revamped the 2003 marketing material for Treasure Houses of England, a collection of nine of Britain’s independent stately homes. The project is worth a five-figure sum and covers the next three years.

The literature, which is published in January 2003, consists of individual booklets for each house, castle and palace in the group (Woburn Abbey pictured), and one generic book on all nine. Other related work such as posters may follow later on, says Steers McGillan director Chloe Steers.

‘The leaflets contain large amounts of complex information such as how to navigate each site. Clarity was uppermost,’ says Steers. ‘The Treasure Houses Group wanted us to reflect the individuality of each house, but link each one together.’

The consultancy was appointed by Chatsworth promotions manager Simon Seligman after a four-way, unpaid creative and credentials pitch in September. Seligman is its main point of contact, as the Treasure Houses group’s marketing activity is based at Chatsworth.