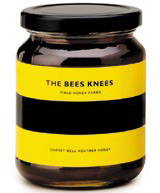 Design Bridge, Lewis Moberly and Like a River last week swept up at the Mobius Advertising Awards, with a combined win of 17 Golden Statuettes.

The ceremony, which has been held annually in Los Angeles since 1971, covers the mediums of television, radio, direct, packaging design for industry or consumer, and print advertising. Packaging design provided the biggest spoils, with four awards going to Design Bridge and three to Lewis Moberly.

Design Bridge won its awards for a sequence of work reinterpreting the packaging of alcoholic drink brands: Tennents Lager, Fernando De Castilla Sherry, Remy Red and Mosel Blumchen. The creative impetus behind much of its award-winning work was to ensure brand appeal within new markets – Remy Red, for example, was seeking to appeal to the African-American market. ‘The challenge was to keep the values of Remy and make it appealing to the black American market, to get people like P Diddy drinking it,’ says Graham Searsby, group creative director of Design Bridge.

Searsby also sees a trend of traditional drinks manufacturers asking for package design that has a softer ‘cosmetic feel,’ which is reflected in the Design Bridge work. It also won an award for its design of the Mosel Blumchen packaging.

Lewis Moberly was the other big winner. Its prizes included two for Grand Hyatt, Dubai, Panini packaging and corporate identity and an award for Tamarind, a range of Indian condiments. It picked up a joint best in show award for Panini.

Manchester creative group Like a River also collected four awards. Judging for the awards is distinctive, says Robert Taylor, partner at Like a River. ‘The judges are from different regions, so when they judge they don’t influence each other.’

Other winners include Pearlfisher and Williams Murray Hamm, which won one award apiece in packaging for Chococo and in the speciality section for Shopping and Karaoke: A True Story, respectively. Produced as an introduction to the company credentials, Shopping and Karaoke is a four-minute film explaining Williams Murray Hamm’s philosophy about the nature of ideas within the marketing industry.