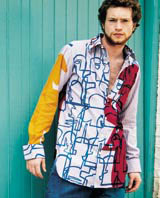 Not bad for someone who found his way on to the RCA masters course by mistake; it’s not like he applied or anything. No, the BA work Todd presented to an external examiner – who happened to be none other than head of print Anne Toomey – was so good, he was asked if he’d be interested in joining the course.

Todd nearly gave up on art during his A-levels due to endless hours of portraiture, but found his calling at Hereford Art College thanks to his teacher, Marion Stroud. He says, ‘She saw a lot of potential in the way I worked and recognised how well my designs lent themselves to print textiles – the strong colours, the way I drew. There was a certain naivety there because nothing ever looked like the thing I was actually drawing.’ From there it was on to the University of Central England to do a BA in Textiles and then on to the RCA.

Inspired by painters such as Henri Matisse, Howard Hodgkin and Patrick Heron, Todd tends to go for expanses of colour and non-figurative motifs. Often based on abstractions derived from photos or sketches taken on scouting missions out and about town, Todd’s designs can comprise anything from an oversized hand – the motif used in recent Top Man and River Island collections, inspired by a businessman clinging on to his jacket – to a silhouette of a person repeated over and over again. ‘I like using photos because you can capture people in a pose,’ he explains. ‘The pictures develop into loose sketches and massive drawings, which are then transformed into screen prints.’

Ever since former RCA teacher Ike Rust, another of Todd’s heroes, suggested he take garments apart to see how they’ve been put together, collage has also been a major aspect of Todd’s work. What other people might chuck in the bin – old bits of clothes, templates, faulty screen-prints – Todd will recycle and use as inspiration.

If demand for Todd’s designs carries on like this, there won’t be much time for recycling. But that shouldn’t really matter. There’ll always be room for mistakes.