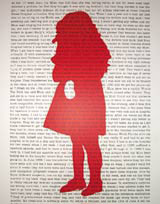 Georgina Potier is the winner of this year’s Re:Creation Awards graphic design category.

The section sported an all-female winners list, with Sara Lewis from Leeds and Sheila Barry from Scotland second and third respectively.

Potier, who is 21, is completing an illustration degree at Kingston University. She was born with multicystic kidneys and her winning work (pictured) features an autobiographical account of her life and experiences.

The awards were sponsored by Top Shop and Dazed & Confused, and were judged by a panel including Peter Blake, David Bailey, Rankin, Katherine Hamnett, Mike Figgis, Jefferson Hack and DW editor Lynda Relph-Knight.