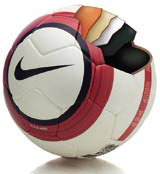 Nike is preparing to launch two product designs, which will have a direct impact on the professional football world.

Produced to counter ball inaccuracy, Nike designers Richard Avis and Ian Wilton from the US have spent two years developing the Total 90 Aerow, a football that is able to travel in a straight line at high speed.

‘The balls were developed out of Nike’s world headquarters in Oregon. The designers used the Nike Sports Research Lab facility to analyse the performance of different materials while testing,’ explains a Nike spokesman.

The design team constructed a machine called Bigfoot to repeatedly kick the ball for testing, as well as using wind tunnels at the University of Washington and the University of British Columbia School of Engineering.

The ball design, to be launched at the England vs Portugal friendly on 18 February, also addresses aesthetic considerations, says the spokesman. ‘The new distinctive [graphic] design makes it easier for players to see the ball, particularly against a crowded backdrop,’ adds the spokesman.

Also set to launch next month is the Air Zoom Total 90 III football boot, which is designed to provide ‘shock absorption’ for footballers who run upwards of 6 miles per match. The boot uses footwear technology designed for marathon runners and features a layer of foam – Phylon – between the upper and the sole.

â€¢ Nike has appointed Brinkworth to review the design of its 300 client showrooms located across Europe, in conjunction with the company’s in-house image design division. The consultancy was appointed at the beginning of December and is currently developing initial concepts for a forthcoming format.