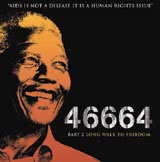 Peacock has created an identity, promotional material and CD and DVD covers for 46664 (above), named after Nelson Mandela’s prison number. It is a global HIV and Aids awareness initiative, and was launched in Cape Town last year. The UK launch sees three CDs and a double DVD released on 5 April. Senior designer at Peacock Jessica Wells says it strikes a ‘balance between the serious tones of Aids awareness and the fun element of music.’