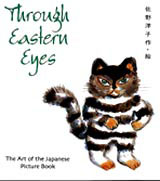 While the Japanese have always revered British illustration – Brian Wildsmith has a museum dedicated to his work in the coastal town of Ito – our appreciation of Japanese illustration has been relatively low-key.

Through Eastern Eyes, part of the Japan 2001 Festival, goes some way to redressing the balance, and shows the vigorous and varied tradition of the Japanese picture book.

Michael Foreman, another British illustrator, describes their approach as “a love affair between artist and the tools of his trade”. And it is true that the majority of the works on show at London’s National Theatre betray a fine feeling for the materials, the paper texture and the flow of colour.

As with our indigenous illustrative art, here we find a wide range of styles, some influenced by the west, some harking back to traditional Japanese lithography, some defiantly postmodern.

Daihachi Ohta’s pictures for The Tale of Tamamushi Shrine, about a sculptor of Buddhist images, could be centuries old, yet Ohta’s Umbrella, in which a little girl wends her way through the rain-soaked city to take her father an umbrella, is as contemporary as anything in the exhibition.

Probably Japan’s most popular picture book from the period after the Second World War is The Cat that Lived a Million Times by Yoko Sano, currently in its 70th print run. Sano has an assured technique, drawing freely and directly on to paper with her brush, moving surely and swiftly.

Shuhei Hasegawa’s Sleepless, a postmodern story for older readers, is the most arresting of the 12 books featured in terms of pictorial invention and originality. Hasegawa combines fine art practice with comic strip ethos in this expressionistic tale of adolescent fears and feelings.

Noboru Baba is a “manga-ka”, or cartoonist who inclines towards parodies of western classics such as Treasure Island and Moby Dick. The award-winning Eleven Cats in a Bag – the Japanese are clearly into cats – is a delightfully engaging children’s book in which the veteran illustrator subverts commonsense values.

Seizo Tashima is a throwback to the ancient traditions of Japanese painting, with his bold brushstrokes and linear energy. His illustrations for the allegorical Fly Grasshopper! show a keen eye and a connection with the natural world. Apparently, Tashima, who is also a farmer, mixes his own “mud paints”, hence the earthy feel to his work.

The idealised world of Akiko Hayashi is patently western-influenced, using pastel colours and a strong feminine sensibility. These are sweet, gentle illustrations aimed at comforting rather than challenging the young reader.

Sheep in Wolves’ Clothing by Satoshi Kitamura, on the other hand, is almost too challenging (for me, at least). It recounts a spoof crime story through 30 disconnected panels. By dodging about the picture frame, the viewer/ reader has to connect up the panels, rather like a jigsaw.

Kitamura, Japanese, but based in the UK, deploys both western and Japanese artistic techniques to give variety to his work. He explains the regional differences: the Japanese prefer unfussy minimalism in their picture books, while westerners like as much detail as an artist is prepared to offer.

Judging by his work on display here, I’d say he has been won over to the western philosophy that more is more.

Through Eastern Eyes: The Art Of The Japanese Picture Book is on at the National Theatre (Olivier Foyer) until 18 August. An illustrated catalogue (priced £4.50) accompanies the exhibition.

BA takes off all world imagery

In a wild tangent…