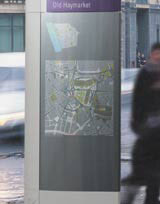 ‘We recognised that we needed to improve signage in the city centre and waterfront areas,’ he says. ‘There are a lot of different types of signs, without one common theme. They’ve developed over the years, but need to be more coherent.’

The scheme, called Connecting Liverpool, focuses on the city’s heritage as well as conveying information and also embraces street furniture.

It provides three levels of information on hub and interpretation panels (pictured), along with finger posts, strategically placed around the city. A Liver bird motif and deep purple colour offer a local flavour.

The first phase of the roll-out will involve a range of heritage plaques designed for sites of interest. It also includes interactive maps giving a taster of the project and an on-line route-planning navigation system.