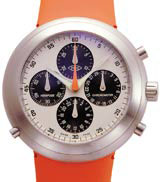 What are we to make of Marc Newson, the now largely Paris-based Australian designer wunderkind? Are we to conclude, as many already have, that he is an antipodean Philippe Starck, immensely talented, somewhat wry, capable of turning his hand to anything from a wristwatch to a car, and above all with an instantly recognisable style? If so, is this a good or a bad thing?

There is no ducking the now embedded Starckian comparison, nor does Conway Lloyd Morgan, in this rather good and thoughtful monograph on Newson, attempt to. Indeed, he sets Newson firmly in the context of Starck as a pioneer of marketable signature design, quotes Newson as saying how Starck has helped him – even recommending him for the odd job – and refers to the French prankster at intervals throughout the book.

But don’t run away with the idea that this is all there is to Newson. All? If that were all – to be compared with Starck – it would still be immense. But Lloyd Morgan’s book presents us also with a condensed history of recent design. His context is thorough, not merely focusing on a few star names, though they are there to be found, from Ross Lovegrove and AndrÃ©e Putman to Simon le Bon (a chum of Newson’s).

You’ll find references to James Bond and Jean Nouvel, Buckminster Fuller and Stanley Kubrick. It’s an enjoyable and informative ride, and as always you can find a missing moniker. Wot? No Frank Gehry? How can you possibly explain all those organically shaped chairs without reference to Gehry and his fish fetish?

I remember being astonished by the first Newson interior I saw – the Mash and Air restaurant/bar/microbrewery in Manchester for Oliver Peyton. It was too much, all that pastel-coloured studded vinyl, but it was such a complete exercise in 1960s space-age nostalgia. That’s where James Bond and Stanley Kubrick come in, of course. Newson’s design very much reflects the absorption of mass culture. Again, this is obvious enough and has been pointed out endlessly. But to what extent does it reflect an Australian sensibility? The sense of cultural isolation, the dependence on the screen as a conduit to all the hip things that are happening elsewhere in the world?

Lloyd Morgan and Newson do not duck this issue either. Newson says he has ‘an Australian attitude’, which he explains as coming from a country with no formal culture, but ‘a history of invention driven by necessity.’

He goes further, comparing Oz to the old Soviet Union: ‘Australia’s the same only less sophisticated, and with more sunshine.’ So Jack Brabham could build a car in his back yard that came to dominate the world of Formula One racing, and the young Newson could watch films on telly and dream of living in that world. In the meantime, as Lloyd Morgan notes, Australia was free from the shackles of the European good-taste design convention. Nobody said that Newson could not experiment with shape and colour. So he did.