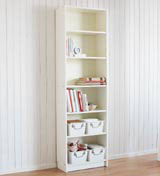 ‘Price is sacrosanct,’ Lewis writes. ‘When [Kamprad] sees a mug in Ikea priced at £1, he wants his designers to make that mug for 50p.’ Lewis believes designers want to work there to test their design prowess within a tight budget.

She says Ikea has ‘battled against accusations of plagiarism’, most recently its Campana Brothers’ favela-chic chair lookalike, Fargglad, but concedes that ‘it does seem to copy design standards’. Not everyone buys a Knappa pendant light knowing it’s a half-decent copy of Danish designer Poul Henningsen’s Artichoke light, but many will. Most revealing is that Ikea ruthlessly, and impressively, recycles materials: metal bins are made from giant, old tomato tin cans, and tea light holders are made from electricity pylons.

One criticism: the book is overlong, with too much padding, and the titles of its chapters are often confusing. Lewis repeats the story of Gillis Lundgren, who invented the flat-pack concept, at least three times, and we can live without random boxes on a history of Habitat (owned by the Kamprad family) and popular Swedish festivals. But she’s done her research thoroughly, and her interest in, and affection for, Ikea permeates the book.

I finished it still unsure as to whether Ikea has truly ‘revolutionised design’, encouraged our throwaway culture (author Douglas Coupland euphemistically described Ikea’s wares as ‘semi-disposable’ in Generation X), put an end to hand-me-down furniture and, to cite that lazy clichÃ©, brought design to the masses. But I think I can confidently answer the question, ‘Why is it so successful?’ Because it’s cheap, stoopid.

Great Ikea! A Brand For All The People by Elen Lewis is published by Cyan Books this month, priced £7.99