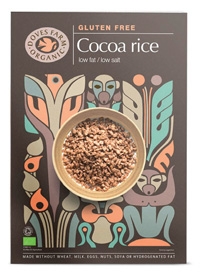 The consultancy rebranded the company in 2006, introducing a new identity system, and was appointed to this project directly in September 2010.

An illustration-focused approach has been used to differentiate from the look of other products in the organic market which are ’at one end of the scale a bit mean and serious, or, at the other, large and mainstream’, according to Studio H creative director Rob Hall.

Hall adds that the Gluten Free range needs ’a voice which isn’t too serious’ translated through a design ’which can be put in front of both adults and children’.

Hall believes a Scandinavian style ’works well for this type of brand’ and therefore commissioned Börner with an instruction to consider a tribal look for the Cocoa Rice product and a ’pastoral’ work for Fibre Flakes. Börner says the Fibre Flakes take on ’a Swedish midsummer romantic’ feel, and the Cocoa Rice an ’exotic look’ characterised by a ’fun and energetic monkey’.

A roll-out will be undertaken in the next few weeks across national supermarkets.

Studio H continues to work with Doves Farm and a range of gourmet ancient grain flours is set to launch by the end of the month. ’They’re the kind of grains used by ancient Egyptians and Romans,’ says Hall, who is again looking to an illustrative solution across the five flours.

Illustrator Paul Desmond has worked on the range using detailed line work and has conjured a ’natural, earthy and organic’ design.