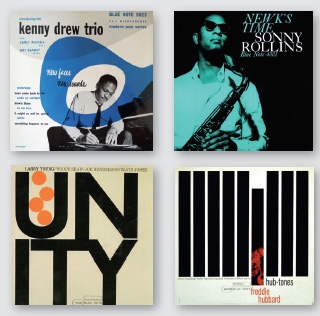 It’s 1975 and I’m on my hands and knees on our living room floor, flicking through my dad’s collection of jazz records. It was the first time I became conscious of the concept of design that something deliberate was happening, and the images in front of me had meaning, a message, and were a doorway into another world.
The sound coming from the as-much-as-we-could-afford stereo wasn’t always appealing to my eight-year-old ear, but the images of cool dudes in sharp suits in smokey clubs transported me. To where at the time I wasn’t sure, but it certainly wasn’t my white, suburban reality.

My dad was a jazz fanatic, a Blue Note nut. I’m convinced that, as with many designers, album covers were the nudge that finally pushed me into a career in design.

It was only later that I realised what Reid Miles did over an 11-year period of designing for Blue Note. He single-handedly produced some of the most evocative and iconic images of a generation. Often on a shoestring budget, using two colours and photographs he took himself during the sessions, he created a legacy of work that conveys the mood of the music perfectly, but also shows that consistency doesn’t mean the same.