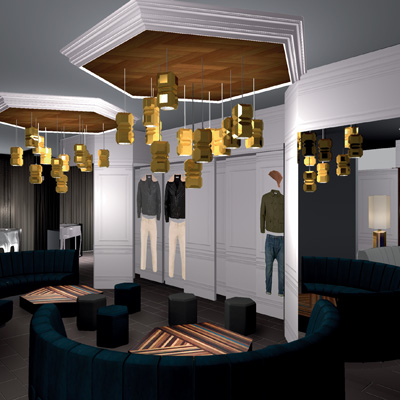 Topman has brought in interior and product designer Lee Broom to design a new personal shopping suite in its flagship store on London’s Oxford Street.

The retailer says the store, which launches on 24 May, is a response to a growing demand for men’s personal shopping arrangements.

Broom has created a contemporary ’gentlemen’s club’ look, with detailing inspired by the Regency period ’and a bit of the 1970s’. Broom has furnished the space with products from some of his own ranges.

A cathode console from his Neo Neon collection a white lacquered Chippendale-style piece that sits in a glass case a Tile lamp and some coloured parquetry tables have been brought in from his Heritage Boy collection.

Three main consultation areas divide the room, which Broom describes as ’a bit more grown-up than other spaces within Topman’.

Whole outfits can be displayed for a customer who has already described a desired look. These are then hung on doors that slide across each other to reveal more clothing options. Broom says, ’Guys can find shopping daunting enough, but this process is engaging and fun. The panels appear to be white Regency, but we’ve used an architrave print. The fashion walls and fitting rooms are all like this using panels that slide across each other.’

This is the first time Topman which approached Broom directly has worked with an external designer on a space. Broom says the client was keen that it stands as an aspirational ’lifestyle area’.