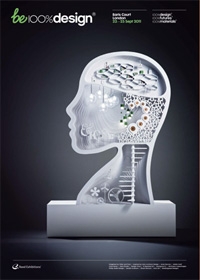 Peter & Paul has created the marketing materials for the 100% Design show, which will be held at Earls Court in London in September.

The group was appointed in December 2010, following a four-way pitch to create new marketing materials for the show’s next three years.

The core idea behind the campaign, which will launch later this month, was to explore what design means in line with the new tagline ’Be 100 % Design’. Peter & Paul director Paul Reardon says, ’We wanted to show a more visceral and sensory aspect of how design affects your life.’

Clusters of products from this year’s show have been placed within a sculpture of the human head as metaphors for how the senses work. Lamps relate to vision, the brain is a storage unit, the ears are speakers and the spine is constructed from a spiral staircase.