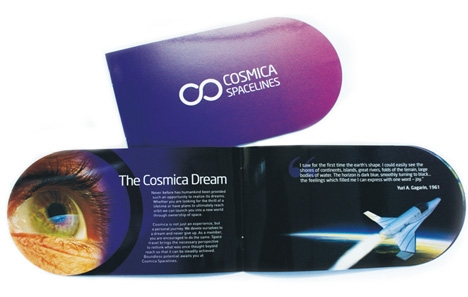 Sherry has created the branding and visual identity for Cosmica Spacelines, a new space tourism company which gives people the opportunity to travel into space, and to buy shares in their own space plane.

The consultancy was appointed in November 2010, having been approached by the client because of Sherry managing director Celeste McNamara’s previous work with another aerospace company.

Ellie Thompson, graphic designer at Sherry, says, ’They came to us with only a business plan and a name. They knew certain things they did and didn’t want, then we were given free rein to explore the limits for the visual identity and the tone of voice.

’Where lots of space companies focus on the technological side, Cosmica wanted to be about a spiritual, emotional experience.’

The identity will be seen on business cards, the brochure, advertisements and the website. The brand marque uses an infinity symbol with a predominantly purple, white and silver palette to differentiate Cosmica from other space tourism companies.

McNamara says, ’They’re producing something different their USP is that you can buy a portion of your own space plane.’

Thompson adds, ’We didn’t want them to look like other space tourism companies, which use a lot of dark and blues. It was about creating something that was fresh, quite organic and not focusing on just going into space, but on a life-changing experience that shifts your perspective.

’We wanted modern, sleek branding that reflects the infinite possibility of going into space time and time again. We used the infinity symbol, which is also the “C” and “S” entwined.’

The website launches on Monday, with the full Cosmica Spacelines launch following on 19 May.