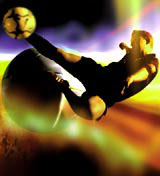 Red Pepper Film Company has created a package of branded stings for ITV Sport. They will launch on 18 October with a night of UEFA Champions League football, and will run for at least two years. Red Pepper was invited to pitch following a hat trick of projects for the terrestrial channel – Euros 96 and 2000 and France 98. ‘We were given a very specific brief,’ says Richard Markell, executive producer for Red Pepper. ‘That was to reflect the size and scale of ITV Sport which is broadcasting more sport than ever before.’ The stings, which will go out before every ITV Sport broadcast, include one specifically for football, one for Formula One and a generic sting also incorporating rugby, snooker and others. The stings feature central sports icons and a background environment branded with the blue and yellow of the ITV logo.

Run without the pack