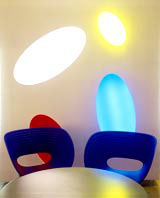 It is all very well for thrusting ad agencies and burgeoning dotcoms to adopt funky working environments but for the major corporate office, it is another matter altogether.

Faced with huge floorplates, vast numbers of desks to accommodate, and maybe pressure to use preferred suppliers rather than a customised design approach, the potential for innovative office design rather than a basic fit-out is comparatively limited.

But there are signs that some of the recent, smaller-office trends for more informal and flexible working environments are filtering through to the big corporates. Just as the dress-down culture has become acceptable even in the stuffiest merchant bank, a more domestic, employee-oriented approach to office design is gaining credence. ‘All companies are offering the same graduates the same package so what’s the difference? It’s the space, the subtleties, the canteen that can make the difference,’ says architect and design consultancy Tilney Shane director Kathy Tilney.

Julian Seward, a principal at architect and workplace designers Swanke Hayden Connell, agrees that awareness of the importance of good office design has risen. ‘The softening of the environment has been happening in some of the big companies. The whole thing has been driven by staff retention,’ he says, adding that companies realise that they need to offer something as well as salary in return for the high pressure atmosphere and long hours.

For its proposed 65 000m2 offices near Brentford, SmithKline Beecham has realised that design can be a tool to change office culture. Swanke Hayden Connell’s design for the building will emphasise communication, with 14 000m2 of communal facilities on the ground-floor, including restaurants and a health centre, plus coffee and break-out areas on each floor.

‘[These new designs are] saying it’s okay to be seen in these spaces talking to people from above,’ says SHC’s Seward. ‘There’s been more of an acceptance in the human resources dep-artment as well as among directors that people aren’t always skiving if they’re sitting in a comfy chair in a corner. It’s about interaction, being seen to be available.’ This emphasis on break-out and recreation areas is becoming more common, with designers able to experiment with furniture usually seen in domestic settings.

‘There’s less of a formulaic answer. You’re not just picking a desk system and rolling it out,’ says Tilney. Choice, rather than any particular way of working, is the buzzword. ‘Everyone works much longer hours and they’re stressed. You need to offer comfy seating areas, coffee bars… you just have to have lots of different options for people,’ says Linda Morey Smith, founder of MoreySmith, designer of offices for Microsoft’s Internet division (see case study, p26).

In the future, office designers will have even more flexibility in workstation design as technology develops to send information to a fax or printer without cabling. Already the deep desk is on the way-out, following the introduction of flat-screens and laptops, another contributing factor to the softer office look. These trends are likely to be evident in the glut of new office development currently underway.

In London alone, there is now 680 000m2 of speculative office space under construction according to agents DTZ – a rise of more than 30 per cent since February. With speculative development a reality once more, the office design stakes will rise as developers compete to attract tenants, and companies use office design as a tool to attract, and retain their staff.